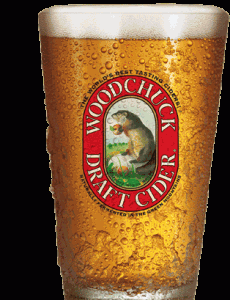 Though hard ciders are processed more like wine than beer (apples being pressed to juice, then fermented and cold-filtered), they’re often side by side the beer tap handles in bars. There’s rarely a pub in the United Kingdom that doesn’t have at least one on tap, and probably more. There’s no question that after a long night in the pub a cider can really slice through that wooly mouth sensation, not that that would necessarily be a big marketing point for cider makers.

They’re largely content to stand on the cider’s virtue’s alone, and ciders will definitely have a presence at the May 22 Brattleboro Brewers Fest–Farnum Hill of New Hampshire and J.K. Scrumpy from Michigan are scheduled to appear, and as our tenth featured company leading up to the day, Woodchuck, the largest selling U.S. cider maker.

The Vermont cidery started out humbly enough in 1991 in Proctorville, with Greg Failing, creator of the original recipe, topping off bottles by hand with a turkey baster. The current Middlebury plant is now a major player in the beverage world, turkey basters long ago replaced. But not replaced has been Failing, who remains the cider maker to this day. He began his fermentable life as a winemaker in upstate New York but began making apple wines in Vermont in 1986. 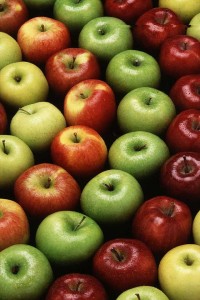 Five years later, Failing’s recipe for Woodchuck Amber Cider hit the market. (For those not in the know, a Woodchuck is slang for a native Vermonter, versus carpetbaggers like myself, known as Flatlanders.) Another Failing blend, Dark & Dry, is now known as 802, for Vermont’s area code.

The 802 was shipped off to the Great American Beer Festival in 1994, and judges couldn’t figure out where to place it into any of the regular beer categories. But in those earlier days of GABF there was a popular vote People’s Choice Award, and the Dark & Dry brought that trophy home to Vermont, beating every beer at the festival.

Cider doesn’t beat beer for me; I’m not a big fan for two simple reasons–they’re generally too sweet for my palate, and as long as I’m drinking something I’d just as soon have a beer, thanks.

Sampling three Woodchuck products this week, I found the flagship brand, Woodchuck Amber, does little to sway me for just that reason–too sweet for me. But the Granny Smith offering is a dryer, and therefore more palatable blend that many a beer (or wine) drinker could probably cozy up to. 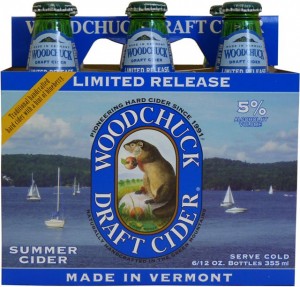 Of the three I most enjoyed the limited release Summer Cider, with a bit more tartness to balance the sweet, and that agreeable “hint of blueberry” promised on the packaging. My wife actually thought the flavor was closer to peaches and pears than blueberries, but it’s ripe and juicy fruit either way.

The aroma and flavor actually reminded me of hard candy bon-bons, the kind with a soft fruity center, which I happen to like. And I liked this, too.

4 Responses to “TAP Cider(s) of the Week 18: Woodchuck Draft Cider”