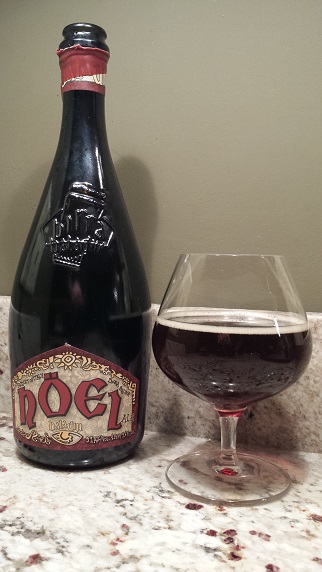 We’re a few days past the shortest day of the year, but we’re right smack in the middle of the shortest 12 Beers of Christmas report. What can I say? It’s Christmas eve, and I had to take out the trash, go to the bank, put the lights up on the tree, fix the grandkids’ lunch, finish off some last minute shopping and pick up a few things on order, haul up some wood, make cocktails, make pizzas for dinner, greet the arriving kids and in-laws, decorate the tree, clean up this and that, put the presents under the tree and finally, when almost everyone was in bed, start wrapping my presents for my wife.

But somewhere in there we also uncorked a bottle of Nöel from Birrificio Baladin in Piozzo, Italy. There’s a lot to be said about this lively and experimental Italian craft brewery, but not tonight. I mainly split it with my son-in-law the restauranteur, but passed some around to my wife and son as well. We were all taken with its malty-sweet caramel nose, a slight touch of roast, and sweet fruit flavors—figs, raisins, maybe a hint of chocolate. It’s bottle-conditioned and uses some raw cane sugar in the mix.

It’s a Belgian beer Italian-style, sweet and appealing and strong, running $11.70 for 25.4 ounces packed into a bowling pin-shaped bottle corked like wine and sealed with wax. So points for presentation, too. 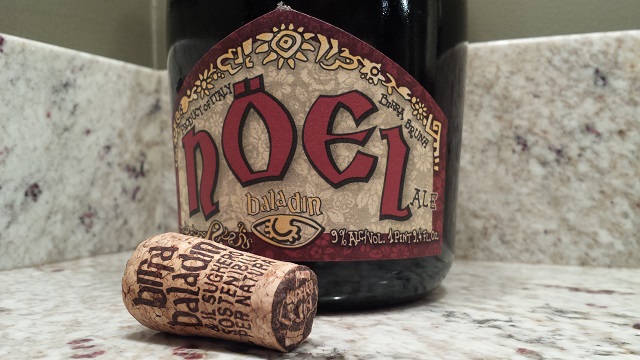