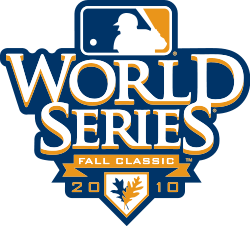 [Oct. 27, 2010] Let the games begin! It’s World Series time, so it seemed like a pretty good idea to try to work in beers from the Giants and Rangers territories for the next two choices. San Francisco, no problem. Arlington is a bit thornier. Even settling for all of Texas hasn’t panned out for me at local stores in the past few days.

Beers from Saint Arnold and Rahr & Sons are being served at Rangers Ballpark. Saint Arnold turned down my request for some samples, so screw ‘em; stay tuned till Monday (Game 5, if necessary) to see if Rahr comes through.

“You don’t care about either team,” my wife points out, “so why do you want to watch the World Series?”

To me the answer is inherent in the question: because it’s the World Series. It’s baseball. The Fall Classic, the end of the road, for all the marbles. Enough said. Although as I began discoursing on Josh Hamilton’s travails and accomplishments, Lynn said, “Don’t even try to get me interested.”

As an old Brooklyn Dodger fan, long a reconstituted Mets fan, I have an inbred hatred of the New York Yankees and, by extension, the American League, where they don’t play real baseball anyway. So I’m pulling for the Giants, although that’s no easy task for a former Dodger fan either.

I managed to crack open the Anchor just before the first pitch, and just as the television viewing audience found out the game was being brought to us by Budweiser. Appropriate ballpark swill, of course, but as I noted in an earlier TAP Beer of the Week post, we won’t be going there.

It wasn’t too hard to find some beer from Anchor and I opted for the Porter for a couple of reasons. One is that it’s been a little chilly here in Vermont and I’d already started turning toward some darker beers when I picked up a six-pack of Sierra Nevada Porter last week. (That the thermometer hit a steamy 70 degrees today is an anomaly that won’t last.)

The other reason was that I was just a little weary of constantly looking for something new to try, and decided to revisit an old favorite that I hadn’t had for awhile, and I wasn’t sorry. So I decided to keep the theme going with the Anchor. Maybe a little World Series-provoked nostalgia played a part, too.

Both porters, like the breweries themselves, were among the first to revive the style in the U.S. in the late 1970’s, and were a revelation to me back then. (Yuengling was still brewing its porter back then, too, though as bottom-fermented beer it was something of a stylistic oddity.) Porters became and remain one of my favorite beer styles.

Both of the California beers were new world interpretations of the British style, with a little more of everything–malt, hops, alcohol, and both are now considered by those who consider beer styles, Robust Porters. Which they certainly are.

Truth be told, I slightly favor the Sierra Nevada over Anchor; it’s a little smoother where Anchor is a little huskier. But they’re both marvelous beers, and this is San Francisco’s night, not Chico’s.

The Anchor pours deep garnet, virtually opaque, with a rocky dark head and a resinous, piney nose (not unlike some of the recent Christmas ales), with the first hints of the black and chocolate malts that are readily apparent in the flavor, as is the touch of roasted barley. The Northern Brewer and Cascade hops balance the beer nicely, but aren’t readily apparent. There’s an almost sour puckering to the finish, which merely seems to suggest another sip is in order. Or, if the game is getting intense (the Giants just went ahead in the fifth), a gulp.

2 Responses to “TAP Beer of the Week: Anchor Porter”