I knew it was going to be an interesting day from our opening hole at the Bali Hai Golf Club. Well, it had already been an interesting morning, leading up to the Golf Road Warriors participation in the Harmon’s Heroes Tournament.

We met Jared Lemon, the veteran playing in our group, swinging the sticks with his remaining left arm. (See my related post on the Golf Road Warriors site, “Veterans Day.”) 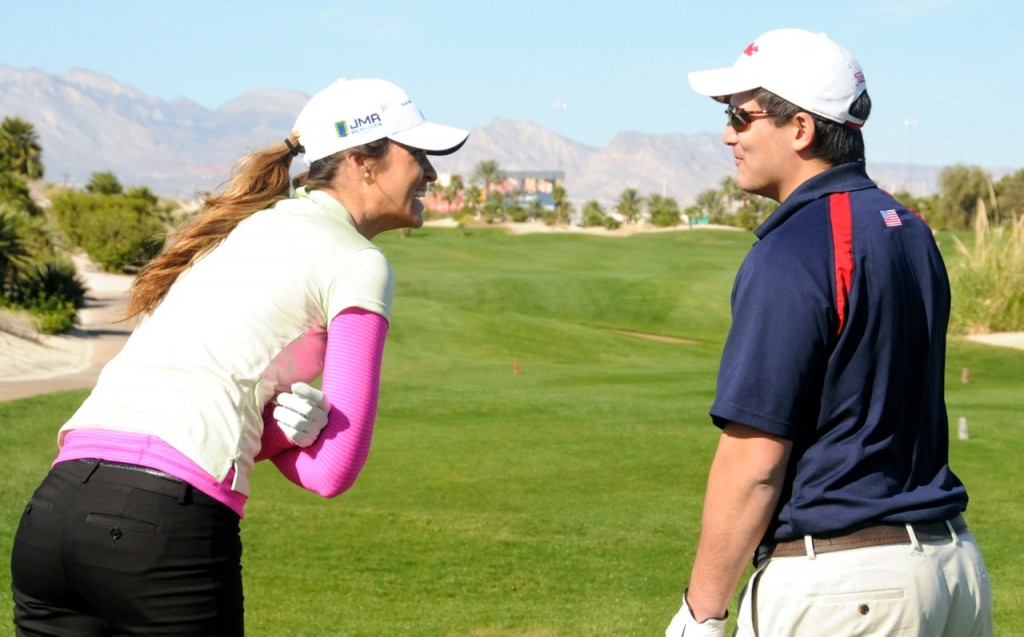 We were also playing with one of the newest members of The A Position team, Aubrey McCormick, undergoing trial by fire with an immediate immersion into the Golf Road Warriors experience. But Aubrey had poise from playing professionally on the Sun Coast, Moon Light and Futures Tours, as well as an appearance on the Golf Channel’s “Big Break Atlantis.”

Our first hole in the tournament scramble was the fourth, which pretty much parallels the flight path for passenger jets departing from the very near McCarran Airport. To a long-time Mets fan like me, the low-flying jets made me positively nostalgic for good old Shea Stadium. 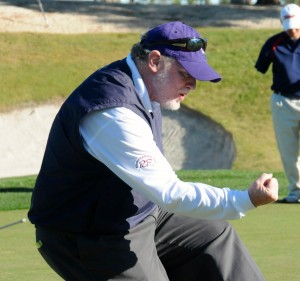 Sunk that one! (©Robert Kaufman)

So I belted one that would have easily cleared the fences at Shea, and it landed distantly in the fairway as well. But Aubrey had been cleared to play the forward tees, a 255-yard shot today. She put it right on the green, and we cruised to our first of four straight birdies. Very interesting.

The course was compelling, too. Our second taste of a Walters Golf track couldn’t have been more different than our first, at Royal Links, which was wide open in a replication of links-style play.

Bali Hai is a Brian Curley and Lee Schmidt expedition into the dreamscapes of Indonesia. You won’t need a machete to work your way through, but the course is lush with tropical flora, countless palm trees, sinuous lagoons and lavish water features.

Few are as well-versed in such sultry design as Schmidt and Curley, who have offices in China and are the team behind the massive Mission Hills endeavors there. (How many have, like this firm, bilingual websites in English and Chinese?)

But for this course, opened in 2000, the pair were mindful of its locale—Las Vegas—and its namesake inspiration—James Michener’s Tales of the South Pacific, which became the classic Rodgers and Hammerstein musical, South Pacific. So a little showmanship, and maybe a Bloody Mary, is not out of order. Fellow warrior Jeff Wallach may have said it best, when we came to the eighth tee: “This is the hole that cries VEGAS!” 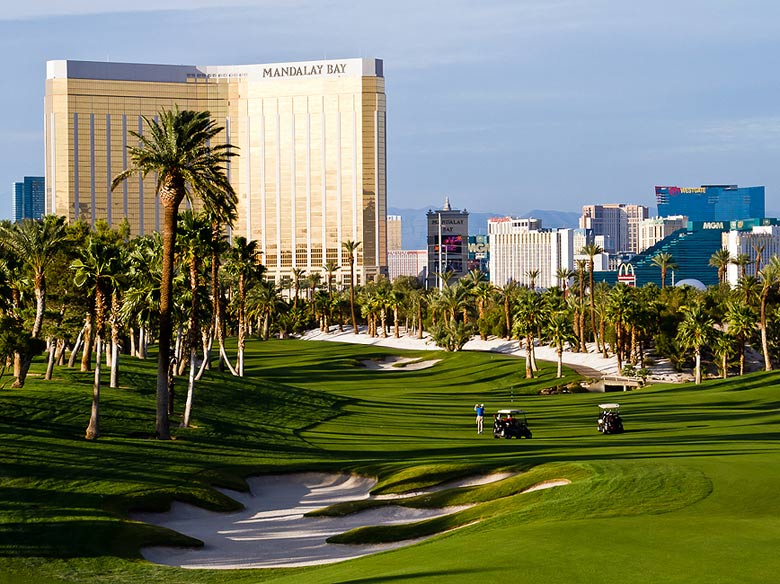 Fifteenth at Bali Hai looking toward The Strip

Indeed, in a city that has proven expert at geographical artifice, here it all was dead in front of us—a 464-yard par-4 from an elevated tee, with the backdrop of the entire recreated world—the Luxor pyramid, THEhotel, the twin monoliths of Mandaley Bay and the tip of the Chrysler Building. No wonder we stumbled to a mere par.

The course is rated 70.2 with a slope of 125 from the golds, and the reason is the reasonable chance of reaching each par-5 in two. (We birdied three of the four).

The par-3 fourteenth is a 224-yard monster, but the other four par-3s are of moderate length—if not moderate complexity. There’s plenty of blazingly white sand on the course, but nowhere more so than on the 165-yard eleventh, called the Lagoon hole because of beckoning water left of the green. But the startling feature here is the sand that literally surrounds the hole. 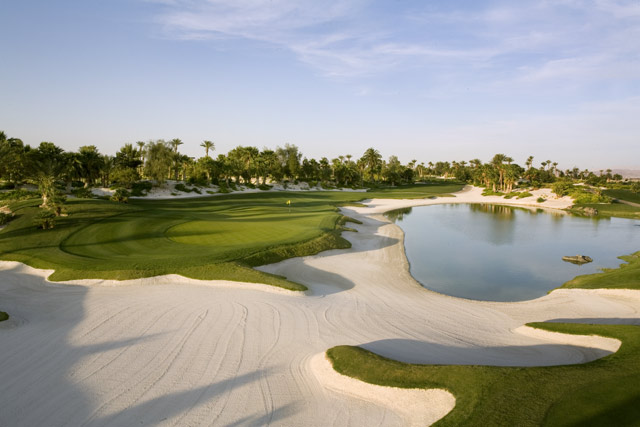 Behind the eleventh green, Bali Hai

As I mentioned in my other post, this is where Jared banged in a monster putt for a birdie and we all went berserk. It was easily the high point of the day, though we enjoyed ourselves throughout, and at the post-round buffet at the clubhouse’s touted Cili Restaurant, which fuses American cuisine with Asian influences.

The clubhouse maintains the Indonesian feel with a spacious panache, and indeed as we made our way out for the day a wedding reception was making its way in. No telling what the slope rating is on any particular relationship, but we can hope the twosome avoids the hazards, and makes it around as well we did at Bali Hai.