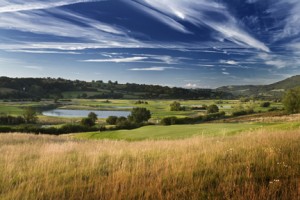 The recent Ryder Cup competition evinced the debate, now familiar, about the speed of the putting surfaces on the Twenty Ten course (pictured at left) and which team it favored. Fortunately, it’s a controversy — if that’s the word — that only recurs biennially. For us non-team members, though, fathoming green speeds and the accompanying contours poses a dilemma virtually every time we play, especially on an unfamiliar course. Even club members who mostly play the same layout grouse about “unrealistic” green speeds – too fast or two slow — or inconsistencies from one hole to the next.

The following provides some perspective on the issue, an article that previously appeared in a golf trade journal, ghostwritten for Holland, Michigan-based golf course architect Raymond Hearn, ASGCA (www.RHGD.com). In three parts.

It is not difficult to understand our collective fondness for old-time, “classic” golf courses.  Part of this is simply a comfort level associated with any familiar presence.  Another aspect of our appreciation of older courses is the suspicion that, due to the absence of heavy earth-moving equipment and motorized golf carts, their designs are inherently more imaginative than their modern counterparts.

(The phenomenon does not apply only to golf courses:  Asked to choose, sight unseen, between comparably sized houses – one built a hundred years ago, the other just completed – respondents in a recent survey overwhelmingly picked the older house.  Typical of the reasons cited for the choice were that it was likely to be better built and have “more character.”)

Golf course architects often acknowledge this attraction to classical features by including pot bunkers, saw-toothed bunkers and other throwback elements in their otherwise modern designs.  But while “classic” seems by definition a good thing, not all the individual features loosely associated with the term are desirable in the context of the way golf is played today.  An especially bad fit is in trying to combine the more drastic contours of old-style greens with the much-faster putting speeds we have come to expect.

I say “especially bad” because the problem is so prevalent.  In fact, in my 20-plus years as a practicing golf course architect, I estimate that seven out of 10 courses I have had the good fortune to play, visit, or consult for have shown some symptoms of this contour-versus-speed syndrome.  Sometimes the problem is confined to a single putting surface; sometimes it is evident in a half-dozen cases.

The complexity and severity of the dilemma also vary widely, but its nature is fundamentally the same:  The greens no longer “work” because their precipitous slopes were never intended to be combined with today’s “normal” green speeds of roughly 10, sometimes more, on the Stimpmeter.

You would anticipate this problem in the case of a course built at the turn of the 20th century but – given the tendency in recent years to equate pure speed on the greens with “quality” – but it also rears its head at much younger courses, a kind of unintended consequence:  In the face of exponential improvements in agronomy and mowing equipment, maintaining the integrity of the playing experience has in this respect become more difficult.

Thus, many green complexes once were cut to heights and otherwise maintained to generate speeds on the Stimpmeter – invented in the 1930s and in increasingly wide use ever since – of six to eight.  Today, many superintendents find themselves in a bind between hewing to that standard and acceding to customer preferences – members in the case of private clubs, patrons at resorts and other public facilities.  Striking a harmonious balance is impossible without some sort of remedial action.

Instead, many club managers and greens committee chairmen reluctantly – and erroneously — conclude that the best solution is just to tolerate a few bad greens.  In rare instances this may be true; in many more situations, however, this conclusion is based on misperceptions concerning what fixing the contour-versus-speed problem would entail, including:

•  the construction will cause significant disruption in play

•  greens that have been remodeled will require extensive new maintenance practices

•  remodeled greens will look incongruous in relation to existing ones

Though these apprehensions sound logical and may have a grain of truth, my view is that they range from exaggerated to downright false.  In short, a well-conceived remodeling project is virtually certain to be the superior answer.

Next: Achieving balance between speed and contour.