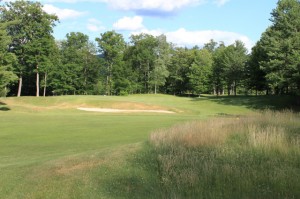 Last week saw a one-two punch that seemed to encapsulate both the hand wringing over the decline in golf participation and the reasons we find ourselves in that position.

Item A was an article in The New York Times about some massive plans for multiple golf-and-real-estate developments in various stages of completion in Cuba. Even the most casual observers of the golf industry will instantly grasp the picture; the story was “news” to American readers principally because we’re enjoined from participating in such projects, thanks to the still-extant trade embargo with our southern neighbors.

Item B was a charity golf outing at Brattleboro Country Club (pictured) in the eponymous town in Vermont. Measuring 6,533 yards, par 71, from the back tees, it’s an archetypal old line New England club in every sense: The original nine holes, built in 1914 from a design by Tom McNamara – a mostly forgotten local golf pioneer who was the first to card a sub-70 round in a U.S. Open (1909) – it was completed in the early 30s by Wayne Stiles, an icon of the region’s golf course architecture.

It’s no doubt evident from my tone that Brattleboro CC is among the favorite golf treats that I look forward to playing whenever feasible. (Walk the layout’s rolling terrain on a crisp autumn day and you’ll be a devotee, too.) But that’s not the salient point here.

The course aside, Brattleboro CC looks like its community. The membership is a cross-section of the populace – tradesman, bankers, lawyers, merchants – who, like the club itself (along with the rest of us), have variegated histories.

(The charitable beneficiary of the outing in question is The Gathering Place, which provides adult day and community-based services for elders and adults with disabilities.)

Of course, any comparison between a brand new luxury resort in the Caribbean and a nearly 100-year-old club in Vermont may ultimately be specious. Still, you can bet, sight unseen, that the developments coming online in Cuba don’t count the natives among their target audience.