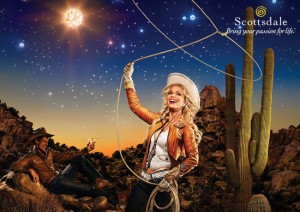 Even Scottsdale's "collateral" is, like its building architecture and golf courses, design-conscious

It’s usually considered bad form to lead off a destination piece by acknowledging that the reader may well know more than you do about the destination in question. But that’s the case here, as Scottsdale has remained a hole in an otherwise well-stamped golf passport, even as I realize the supply of new candidates is inexhaustible.

Still, there’s a thing or two I know about Scottsdale despite having spent limited time there. Combined with the change in weather in the Northeast – it feels like winter for the first time – expectations for a most welcome change of scene are high.

First, there’s the wealth and quality of the golf, including a couple of iconic names on bucket lists near and far. As a guy who believes there’s no such thing as a bad course, I’m nonetheless prejudiced toward the old-style, cut-from-forest layouts typical of New England. Thus I can’t wait to deepen my appreciation of desert golf architecture.

And distinctive design is widely regarded as a trademark of Scottsdale’s identity, golf and otherwise. The downtown area is circumscribed by a canal system originally implemented by indigenous Indians and entertains as many as 30,000 daily visitors during high season. The absence of chain stores and retail outlets at SouthBridge, focal point of downtown, stands out as a progressive urban feature.

Scottsdale also is home to Taliesin West, Frank Lloyd Wright’s western headquarters. Perhaps the design consciousness is connected to Wright’s best work, in the Midwest; in any event, there are transplanted Chicagoans and Wisconsinites all over the place.

Scottsdale also occupies its own niche in the history of the upscale resort, including structures like the Hotel Valley Ho, a modern-architecture classic that dates to the mid-20th century heyday of the vernacular.

There’s even talk of a hot-air balloon ride to contemplate Scottsdale’s exotic desert ecosystem – a treat for a guy coming from the Hudson River Valley, assuming nobody upchucks.