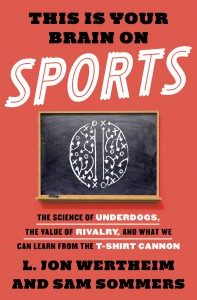 As the cheeky title hints, This Is Your Brain On Sports is a mirthful look at our goofy but mostly harmless obsession with sports. Instead of just an extended discussion of the well-trod topic, though, it examines the matter in its relation to neuroscience and our typical cognitive tendencies.

A clever idea. The research included in the text is thoroughgoing without feeling like a slog. And despite the “academic” perspective, the authors, while professional, don’t seem to take themselves too seriously. So why was the net effect on this reviewer one of depression rather than amusement?

Serendipitously, the order of the chapters didn’t help. Subtitled “The Science of Underdogs, the Value of Rivalry, and What We Can Learn from the T-Shirt Cannon,” the book opens with a discussion of the last of these three. To summarize: Fans are willing to go to ridiculous lengths to acquire free stuff (like T-Shirts shot from cannons), most of it useless – the proverbial trashing of a $500 suit to snare a $5 baseball.

Trouble is, as a golf writer whose career has mostly focused on destination material – an entire industry built on the concept of the “freebie” – the last couple of decades have essentially constituted my own clinical trial. In other words, I could have told them this without referencing any of the supporting science.

Sure, some of the experiments devised to quantify our weirdo proclivities are kind of ingenious in their own right. (Who thinks of these things?) But there’s little or nothing in the litany of sports idiosyncrasies – why we remain fans of shitty teams; why great players make bad coaches; why we vilify drug offenders on rival teams while giving slack to those on ours – that doesn’t seem substantially intuitive and, for the most part, small-minded.

This Is Your Brain includes the occasional aside only tangentially related to matters at hand. Wertheim’s account of the Harlem Globetrotters / Washington Generals dynamic, which he briefly observed up close, is hilarious and my favorite snippet from the book. In a long footnote, he addresses the question of why the Generals — who lost something like 15,000 games in a row and were humiliated in the deal — wouldn’t merit some underdog support.

Turns out we’ve already assigned that status to the Globetrotters, many of whom were barred from more prestigious professional leagues due to racial discrimination. Wertheim quotes the General’s manager (and point guard), Red Klotz, on the crowd’s reaction to the team’s one recorded victory over the Globetrotters, in 1971: “It was like we had killed Santa Claus.”

He and Sommers also readily concede that our ardor as fans sometimes deteriorates from quirky to sick. (Consider their discussion on “tribalism,” for example, in light of our current political milieu.) As to the capacity of sports to promote harmony, they don’t sugarcoat it:

“Do global events – the World Cup in particular – truly lead to world peace?…….In a word: No.”

The confirmation that sports is as capable as any other endeavor to evince the basest, least rational elements of human nature should perhaps seem obvious. That doesn’t make it any more comforting, even if the book often succeeds in portraying sports mania as so stupid it’s funny.

Bottom line is that rather than a form of diversion from an ever-more-coarsened general culture, sports is part and parcel of it.