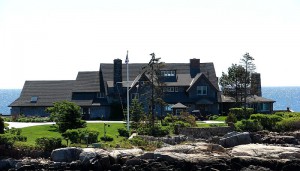 Various members of the extended Bush Presidential family have been visiting Michigan within the last month. Former First Ladies Barbara and Laura Bush were in Grand Rapids to speak at an event just before former President George W came to give a commencement speech.

“I sent my advance team in…my mother and sister,” joked the 43rd President.

In late May, I spent half-an-hour with former Florida Governor Jeb Bush, brother and son to Presidents, at Grand Hotel in Kennebunkport, Maine, where President George H.W. Bush summers at the family seaside home and quaint in the way Mackinac Island is. So for all the Bush visits to Michigan, Michiganders are welcome to visit the Bushes!

Kennebunkport is 15 minutes south of Portland Airport and 80 miles north of Boston. The Bush home is plainly visible to passersby across a cove on Walker’s Point – a small, rocky outcropping of land 41st President George H.W. Bush has dubbed his “Anchor to Windward.” Visitors can take photos at a giant anchor and plaque placed in his honor between the road and the bay which is also home to his beloved speedboat “Fidelity,” at the helm of which #41 has often been spotted alongside, of course, a Secret Service boat.

Tourists can also visit “Ganny’s Garden,” created to honor former First Lady Barbara Bush, who is called “Ganny” by her grandchildren, for whom each individual tree was planted. The flowers and subtle statues are in front of the Captain Lord Mansion and Spa, an authentic, historic, romantic, bed and breakfast (think fresh Maine blueberry pancakes!). Innkeepers Rick and Bev Litchfield, Kennebunkport civic ambassadors who have met the Bushes – it’s likely you’ll spot them, too – host informal wine gatherings in the shade on the lawn. Visit www.CaptainLord.com.

There is also plenty of Bush memorabilia in Ken Raynor’s shop at Cape Arundel Golf Club, which is open to the public. Raynor is like family to George and Barbara.

The Bushes have been known to dine at Mabel’s Lobster Claw, an eastern seaboard-style seafood restaurant on Ocean Ave., the main road, between Dock Square at the corner of town (where you can also get Bush souvenirs) and Walker’s Point. President Bush is said to order a dish called The Dutchess: fresh lobster meat, scallops, and shrimp baked with garlic, Chablis wine and seasoned crumbs, though Jeb Bush, who is also considering a Presidential run, told me, “Dad doesn’t eat like that anymore.” Don’t forget the blueberry pie or cinnamon ice cream!

And as President Bush’s mother told him on childhood vacations to Kennebunkport, “Breathe in that sea air!”