Being invited to spend a night in the Lincoln Bedroom might sound like the most exclusive bed and breakfast experience, but having to live in the White House, I suspect, is much different. I will never forget the sight, eight years ago, of the newly-inaugurated President Barack Obama, his wife and two little girls walking across the lawn from inaugural parade and into their new home – the White House – for the first time as a young family. “Welcome to jail,” I thought. Would you like to live in the same building as your office with an agent standing outside your bedroom door all night? 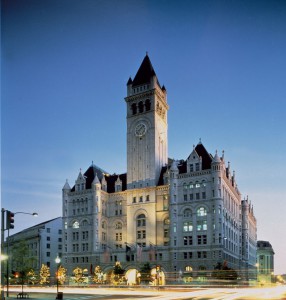 Just up Pennsylvania Avenue, though, a month before the election, Trump International Hotel Washington D.C. will open after a $200-million dollar renovation of what was the “Old Post Office” building.

I still get chills thinking about my visit to the White House, but not because of the history or grandeur of the antique building. It was because of the fearsome, camouflaged, security soldier with the green and black painted face and huge gun I saw patrolling in the trees and bushes to protect the First Family. I made eye contact with him from a distance and he stared right through me, with an intense expression, without even blinking. It was a look that made me feel guilty just for looking at him.

I spoke with Donald Trump’s son Eric Trump recently and speculated that his father, who owns some of the most luxurious hotels in the world, would not really want to live in the dowdy old White House if he’s elected President.

“He definitely will live in the White House,” Trump assured me. “It’s a great building with such amazing history.”

Just up Pennsylvania Avenue, though, a month before the election, Trump International Hotel Washington D.C. will open after a $200-million dollar renovation of what was the “Old Post Office” building. Guest rooms will start at $545 in the off-season and $795 in high season; with a 4,000 square-foot, three-bedroom suite – the largest in the city – in what used to be the Postmaster General’s office. A library and study, with 21-foot ceilings, will be available to guests. Trump’s daughter Ivanka designed the spa to have a more modern functionality.

By the same token, but on the other side of the aisle, it’s hard to imagine former President Bill Clinton wanting to haunt the White House halls again as Hillary Clinton’s “First Husband” when he won’t be calling the shots behind the Resolute Desk in the Oval Office and can have the run of the world and its’ golf courses instead.

One of the more charming White House stories I’ve heard comes from Ken Raynor, golf professional at Cape Arundel GC in Kennebunkport – the summer golf club of President George H.W. Bush and his family. “My wife Anne and I drive from Maine to Florida each winter, and President Bush, when he was in office, asked me where we stop and stay in the drive down,” Raynor told me. “When I explained to the President that we stop at whatever random roadside hotel we come across on the way, he insisted we overnight at the White House instead. He said, ‘It will break up your drive a little!’”