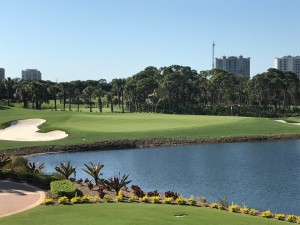 As the University of Alabama football team lines up for yet another run at a national title, one of the Crimson Tide’s finest golfing alums, 1976 U.S. Open-champion Jerry Pate, still lines up putts and is on the line often with football coach Nick Saban.

“Nick doesn’t ‘chit chat’ a lot but I talk with him at least once a week. It’s at about 7:10 in the morning. He’s on a tight schedule,” says Pate. “I don’t think Donald Trump’s schedule would match Nick Saban’s. Nick’s schedule would dwarf any president’s or CEO’s schedule. He’s the guy. I have never seen a person work so hard or be so focused and so deserving as Nick Saban. Friends will often text me to ask how the Alabama football team keeps winning. I answer with two words: ‘Nick Saban.’”

Pate and Saban share a love of golf, but now they share friends from Lansing too. Saban used to be head coach at Michigan State.

“Nick asked me to join him for golf down here in Tuscaloosa with MSU basketball coach Tom Izzo and trustee Joel Ferguson when they came in for Nick’s daughter Chelsea’s wedding. We had some laughs and now I have some new friends in Lansing and I am a big MSU fan,” says Pate, who designed the home course of the Crimson Tide golf team and now lives in Florida.

“We call you folks who come down from Michigan ‘blue tags.’ We love to see ‘blue tags’ his Florida in the winter because it helps our economy,” says Pate, who just renovated WCI’s Colony Golf and Bay Club in Bonita Springs, an upscale, gated community now home to a growing number of Michigan transplants. “I enjoyed working in Michigan for a while, too, when I built a course at Indianwood County Club in Lake Orion for Stan Aldridge. I renovated the old Wilfrid Reid-designed golf course and then Bob Cupp and I built the ‘New Course’ there. A couple of Women’s U.S. Opens have been contested there and a Senior U.S. Open.”

Pate, won eight times on the PGA Tour, including a Canadian Open victory in the same summer as his U.S. Open triumph, and a win in the very first Players Championship held at the infamously difficult TPC Sawgrass near Jacksonville, designed by his mentor Pete Dye.

“The players were testy all week because we’d never seen a golf course that hard,” recalls Pate, who, during the trophy ceremony on the 18th green, threw Dye and PGA Tour commissioner Deane Beman over the greenside bulkhead and into the lake before jumping in himself.

“It’s Florida. There were gators in there,” he now laughs.

Pate won a U.S. Amateur and was a PGA Championship runner-up. He also has two Champions Tour titles. The Kiva Dunes resort course he designed in Gulf Shores, Alabama is also very popular, as is that beach destination for Michiganders.