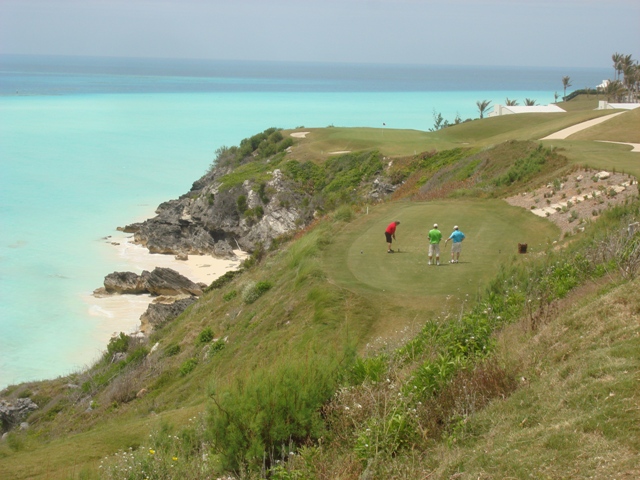 HAMILTON, BERMUDA – I had heard Bermuda was a favorite getaway for refined celebrities. I was convinced it was true when I recognized actress Brooke Shields next to me in the customs and immigration line at the airport. I showed her my business card. “The spelling of my last name – Shiels – is missing the ‘D,’ so I’m sorry but we must not be related after all, Brooke.”
“Then I’m not sure what the ‘D’ gets me,” she joked, smiling and obviously in a very good mood. Celebrities are especially giddy about arriving in such an idyllic hideaway because the slender island does not cater to peering paparazzi.
“We don’t bat an eye at celebrities here. Of course, we say ‘hello’ to everybody, but we leave them alone otherwise,” said Jamal Simmons, a public relations director for the Fairmont Southampton Resort, which is situated scenically on the highest point above the island. “It is a major insult to pass someone on the street here and ignore them without offering at least a simple greeting.”
How very civilized! Bermuda is a remote British dependant territory – an intimate archipelago in the Atlantic 1,000 miles north of the Caribbean and 600 miles due east of North Carolina. Island life here is more refined – more “High Tea” than “Margaritaville.” And yes, evening formal attire for Bermudian men means a jacket and tie with traditional knee-length Bermuda shorts and knee socks. “It’s like wearing a powdered wig in Washington D.C.,” Simmons laughs. “It’s a very old custom but we know the tourists love seeing the outfit.”
Simmons knows protocol. When he served as Chief of Staff to Bermuda’s former Premier Ewart Brown, he met the biggest celebrity ever to visit – Her Majesty Queen Elizabeth, who arrived in 2009 to celebrate Bermuda’s 400th anniversary. “She’s down to earth, believe it or not. I think, like everyone, she relaxes more when she is in Bermuda.”
“Her husband, the Duke of Edinburgh, visits very often,” says Stacey Evans, with the Bermuda Department of Tourism. “It’s very exciting.”
Hollywood royalty such as Academy Award-winning actors Catherine Zeta-Jones and her husband Michael Douglas have resided in Bermuda, along with New York’s City’s billionaire mayor Michael Bloomberg, who travels less than two hours by air from the Big Apple. For the next two years, as they have for the past four years, professional golf’s 2011 major championship winners (in the past the likes of Ernie Els, Graeme McDowell, Jim Furyk, Padraig Harrington, and Angel Cabrera) will come to Bermuda to compete in the PGA Grand Slam Tournament at the ocean side Port Royal Golf Course.
“I really enjoyed it,” said Els, of Port Royal GC. “The green surfaces are really good, world standard. The fairways are great, too. If you put (the ball) in play, you can make some birdies. It can be quite a fun course.”
It’s not the stars people come home raving about, though. It’s the pure pink sandy beaches and neon blue water so brilliant it is hypnotic.
For more information, visit www.GoToBermuda.com