Last year, on Christmas Day, I was scheduled to board an afternoon Delta flight for a long-planned holiday trip to Venice, Italy. It turned out though, by fiat (pardon the Italian pun), that I’d be going “oh solo mio.” But once I’d walked into the terminal at the bright, gleaming, colorful, Detroit Metro Airport, I felt not the least bit alone.

I confess to loving airports. Crazy, perhaps, but I happen to find a Zen-like peacefulness amidst the maelstrom. To me the airport is a nice, safe place where, once through the TSA security check, I can “check out” of the real world behind the barrier and into a fortress of flight. It’s like a physical and virtual club…a society of people in motion, but at the same time, reading and at rest.

On Christmas, the piano player in the concourse tinkled out jazzy carols as I sat at the marble bar at Andiamo Ristorante Italia (near gate A-30) for a pre-liftoff plate of gnocchi and a soothing glass of Chianti. I celebrated the occasion of my trip and I knew that when I changed planes in Amsterdam, a cold breakfast beer, courtesy of Sam (the Egyptian bartender usually there on morning duty), would be drawn from the tap for me at another favorite:  the stylish Grand Café Het Paleis. 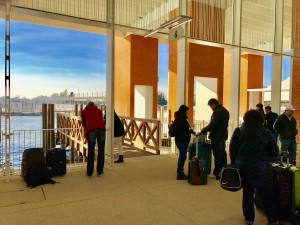 I’ve often also had haircuts, pedicures and massages at airports, which is a nifty use of time, if you think about it.

Experiences such as mine and countless others play out in airports around the world every minute of every day – even Christmas: a solider coming home; a college student going off to school for the first time; a grandmother heading back to Phoenix after flying in for the week to see her daughter’s new baby; a businessman slinking back into town after failing to make the sale. The human vignettes are everywhere if you just look.

I always keep my eyes open for celebrities and notables at airports, too. Surprises happen in the forced commiseration. For instance I once found myself, at the conclusion of a flight to Montego Bay, Jamaica, waiting at the Sangster International Airport baggage carousel – for half-an-hour – with baseball All-Star Roger Clemens. The small talk we made staring at the empty belt was a form of bonding that made for a nice round of golf that weekend and dinner with “Rocket” and his wife Debbie. I also had a brief conversation with actress Brooke Shields during the immigration line wait in Bermuda…which was not followed by golf and dinner, by the way.

Marco Polo International Airport proved to be a fun arrival to Venice since passengers float to the town’s Grand Canal aboard a water taxi and, in my case, a drop off at the dock/door of the Hotel L’Orologio…with a similar departure, on New Year’s Day, from the Londra Palace Hotel.

Though sensory research indicates the anticipation of travel outweighs the resulting memories, I have thought about my Venice visit virtually every day of 2017. It was another enlightening international adventure that began – and ended – in the embrace of the airport.

Travel Writer Michael Patrick Shiels may be contacted at MShiels@aol.com  His radio program may be heard weekday mornings on 92.1 FM.  His latest book is “I Call Him Mr. President – Stories of Fishing, Golf and Life with my Friend George H.W. Bush”