Dave Davies is one of the many Michigan snowbirds who found his way to Southwest Florida – in this case – Bonita Springs – and stayed. While attending the University of Michigan, he won the Detroit City Handball Championship, and still returns to Michigan once each summer for a reunion with his pals at Burt Lake, near Harbor Springs.

“It’s an annual gathering of ‘old broken-down’ handball players,’” he joked while steering me, in his black car taxi service, on a 15-minute drive to the Southwest Florida International Airport from Altaira, the new (under construction) luxury residential tower in WCI’s posh but tasteful Pelican Landing development. Construction of the tower, which looks over The Colony Golf Club, the Gulf of Mexico’s Estero Bay and the acclaimed Lover’s Key State Park, signals a revived economy and a demand for residency in Bonita Springs – which sits between Ft. Meyers and Naples – from plenty of Michigan transplants and second home owners. Statistically Michigan is one of the top-three states to send visitors – and buyers – to Bonita Springs.

“I once drove a fellow from the Ft. Myers airport to the Ritz Carlton who told me he was from Detroit,” Davies recalled. “I asked him what he did for a living. He told me he worked for the Detroit Red Wings.”

Making conversation, Davies says he asked the fellow what he did for the hockey team.

Davies, a tennis fan with little hockey knowledge, knew that tennis star Anna Kournikova, a South Florida resident, was dating one of the Red Wing players. So he asked his passenger if he’d ever met Sergei Federov?

They both laughed when eventually Davies figured out the man in his backseat was hockey superstar player Steve Yzerman!

Since then, Yzerman himself has moved from Michigan to Southwest Florida to manage the Tampa Bay Lightning. 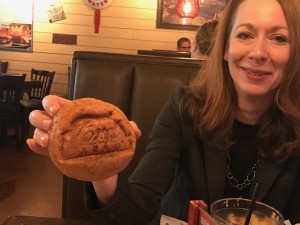 Davies, by chance on separate occasions, has also driven rock stars Eric Clapton and Robert Plant, but he says General Electric CEO Jack Welch was the best tipper. Welch is an esteemed corporate titan, but it is Thomas Edison and Henry Ford who were the best-known business moguls who had homes in the area. Michigan visitors looking for a touch of home can even lunch, dine, or drink at “Ford’s Garage,” an elaborately-themed homage to the Ford Motor Company in the Miromar Outlets. The casual restaurant is an like an Epcot-quality attraction/experience including a full-sized Model T with spinning tires and the occasional smoking  backfire suspended over the bar. Menu items are named for an automotive elements or personalities – such as “Edsel’s Hot Pretzels,” and “Firestone Shrimp” – and the burgers have the iconic script Ford oval logo toasted into the top bun. The restroom sinks are made of tires with gas pumps for faucets; cloth napkins are ringed by fastener clamps; and vintage photography covers the walls. See AltairaWCI.com or FordsGarageUSA.com for details.