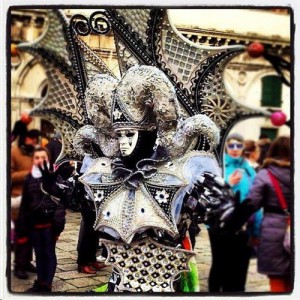 There are few cities which inspire a sense of romance in the Cinderella fashion of Venice, Italy

There are few cities which inspire a sense of romance in the Cinderella fashion of Venice, Italy. It’s softly dramatic, Renaissance period, gothic-style, red-roofed palaces line more than 100 tiny islands connected only by canals and small bridges. It was good enough for Casanova to call home (the infamous womanizer did from 1725 to 1798), and it’s still fantastic enough to fulfill flights of fantasy according to those who have visited.

Casanova came 400 years after Marco Polo (Venice named its’ airport for the world explorer), but I know my “discovery” of Venice, this Christmas, will be less arduous that it was for Polo. He told the Khan “Every time I speak of a city, I am speaking of Venice.”

I’m told walking across Piazza San Marco to see the gleaming, golden Byzantine tiles in the 11th century St. Mark’s Basilica, one can virtually hear the music of Vivaldi (a Venetian violinist in the Baroque era) often used in wedding preludes, playing in one’s head – despite the sacred silence in one of the world’s most famous churches. The basilica boasts five delicate domes supported by 500 columns.

So moved by Venice, it was there State Senator Joe Hune, of Fowlerville, proposed to his now wife. “Marcia couldn’t possibly say no in a gondola outside Casanova’s house,” Hune jokes.

Author Truman Capote, who wrote “Breakfast at Tiffany’s” compared visiting Venice to “eating an entire box of chocolate liqueurs in one go.”

But American Humorist Robert Benchley, upon his first visit in the 1950’s, took one look and immediately sent a cable home to his friend reading: “Streets full of water. Advise.”

Venice has canals in place of streets, and a famed ride in a gondola – the iconic, handmade Venetian watercraft – steered by a striped-shirt, singing gondoliere under the romantic bridges is the type of traditional experience ICBellagio.com arranges for tourists. Sipping Prosecco along the way, one need not wonder any longer what’s behind the gothic windows of the palaces along the Grand Canal since a private tour can take one behind the closed doors of the noble families of yesteryear.

Between Christmas and Lent, centuries-old legend has it aristocrats and peasants hid their identities behind the artistic, colourful masks associated with Venice to this day. Another of ICBellagio.com’s tours allows visitors to craft their own “mask masterpiece” using Swarovski crystals and precious metals.

Water is life, and, since I will be there at Christmas, I am buoyed (pardon the pun) by the words of poet Joseph Brodsky, who wrote of the restorative powers of waking up in Venice in the winter and flinging open the windows to let in the “damp oxygen and prayers.”: “No matter how autonomous you are, how much you’ve been betrayed, how thorough and dispiriting in your self-knowledge, you assume there is still hope for you, or at least a future.”