Glamour rolls into Michigan in a week for the annual North American International Auto Show – a glitzy glide over red carpets and under neon lights at Cobo Center in Downtown Detroit. It’s a news-making, world event among the other major international car shows staged in Paris, Tokyo, Frankfurt and Geneva. The automotive world comes to frigid Michigan to show off its’ eye candy, and it’s fun to, in the warmth and glow of Cobo Hall, kick the tires, sit behind the wheel, take selfies with the “spokes-models,” and dream. But I began thinking about some of the best getaway places to see vehicles “in nature,” as opposed to on display at an exhibition…in the same way the way it’s more exciting to see an exotic animal on the prowl in the wild as opposed to a caged beast at a zoo.

The street in front of the entrance to Casino de Monte-Carlo, in Monaco, is as dreamy as the 19th century, belle époque temple of gaming itself due to the cherry red Lamborghinis, yellow Ferraris, and midnight blue Bentleys parked out front. Secret agent 007 James Bond pulled up in this Aston Martin DB5 in the film “GoldenEye,” and, each spring, the race cars of the Monte Carlo Grand Prix roar right through Place du Casino and past Café de Paris, a vintage brasserie offering outdoor seating throughout the year for the best street-side car-watching on the continent.

The crumbling yet vibrant Havana, Cuba, is a trip back in time in many ways (travelers have to do without some modern comforts), but visitors never mind seeing the pervasiveness of old American cars on the city’s cobblestone streets. What’s more, you can, though OldCarTours.com, book sightseeing excursions in the sun being driven in your choice of vintage convertible beauties such as a 1955 Buick Roadmaster; 1958 Cadillac Fleetwood; 1957 Chevy BelAir; and a 1950 Oldsmobile 88…all of them in colors like pink, fuchsia, lime green and sky blue. In Cuba you’ll also spot some much more utilitarian Russian-made vehicles you’ve surely never before laid eyes on, and likely won’t again. 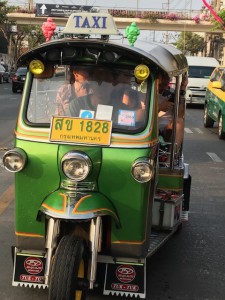 A Thai tuk-tuk takes tourists through the streets of Bangkok from the Anantara Siam Hotel. (Credit Michael Patrick Shiels)

The inaugural Peninsula Hotel, in Hong Kong, is famous for its fleet of luxury vehicles including a 1934 Rolls Royce Phantom II and 14 other RR’s to ferry guests. The Peninsula Beverly Hills offers its suite guests sweet rides along the California coast in Infinity luxury vehicles; and closer to home The Peninsula Chicago zips guests around the Windy City in two custom, British racing green, MINI Coopers.

And when it comes to zipping around the heart of a bustling city, you might well arrive at Bangkok’s luxurious Anantara Siam Hotel having been driven in a three-wheeled Thai “tuk-tuk,” which is essentially a motorized rickshaw. The colorful taxi experience is a local curiosity not to be missed, as is the hotel which immerses guests in serenity and calm right in the center of the buzzing oriental city’s temples, back street cuisine and charming quirkiness.