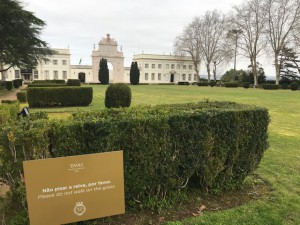 The daughter of an automotive engineer, she was born in Bay City, Michigan, and raised in Pontiac and Rochester before dropping out of the University of Michigan to begin a music and movie career which would result her being known worldwide simply as “Madonna.”

Her career led the pop star through typical turns in New York and Hollywood, and most recently she’d been living in London. But Madonna, 59, and her children recently moved to Portugal, which has made her the talk of the town in Lisbon and nearby medieval Sintra. Most locals believe she has planted her family flag in Portugal in order for her 11-year-old son to participate in the high-profile Benfica soccer program.

“Everyone in town is looking for her,” said Abel Bile, a professional driver who was hired to pick her up at Lisbon Airport, where he waited…and waited. “Eventually I learned Madonna was whisked out a discreet door in the back for security purposes. I was only there as a trick to mislead the paparazzi.”

There have been some high-profile moments involving Madonna though, according to Beatriz Vanzeller, a Lisbon tour guide. “I read she threw a party inside a palace that we read about when we studied history in school. I thought, ‘Can someone really do that?’”

Madonna has ventured outside the invitation-only rope lines, too, in culturally rich and colorful Lisbon – which is the least-visited capital city in Europe.

“It seems Madonna has been spotted in the restaurants and even singing in the Fado joints. By all accounts she likes people and they respect her space,” said Joana Jeunehomme, an executive with Tivoli Avenida Liberdade, one of the luxury hotels in the city center where she has been spotted along what is known as the “Champs Elysees of Lisbon.” “I suspect she wants to make a difference by creating a ‘wow factor’ in another country and in an, as yet, authentic, unexploited city.

The ‘Material Girl’ has also taken afternoon tea at Tivoli’s Palacio De Setais, a circa 1802 restored stately palace-turned-luxury hotel in nearby scenic Sintra which also hosted the King and Queen of the Netherlands in October. Madonna made more of a stir than royalty, though, when she posted a photo on social media of three of her children joyfully running and playing on the hotel’s broad, manicured lawn in front of the hotel. Madonna’s Instagram post riled some since, plainly visible in the picture, is a sign at the edge of the lawn reading: “Nao pisar a relva, por favor…Please do not walk on the grass.”

Nevertheless, Vasco Serrano, the hotel’s historical expert, describes Madonna as “our new neighbor” and says he hopes she will visit the hotel many more times.

“When she was due to come I thought I’d be meeting a ‘diva’ and I would have to throw my coat to the ground for her to walk on, but instead Madonna was a very regular person,” he said.

Regardless, every guest is treated like the monarchs and sheiks which have stayed in the regal boutique hotel and enjoyed its ornate grounds, herb gardens, lemon trees, topiary, swimming pool and spa. Horse-drawn carriage rides give guests the prince and princess treatment by taking them to castle tours in the center of tiny, timeless and scenic Sintra.

Did Madonna purchase a palace in Sintra or was it, rather, a home in Lisbon? Either way the buzz about the pop princess is good for Portugal.