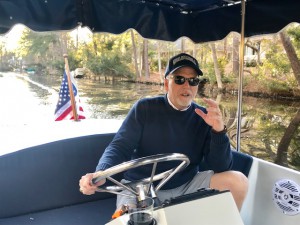 Joe Maguire and others at Palmetto Dunes enjoy the resort’s lush waterways and natural beaches. (Photo by Michael Patrick Shiels)

The term “halfbacks” usually makes Lansing-area residents think of players carrying the football for Mark Dantonio’s team at Michigan State University. But Joe Maguire, of East Lansing-based Wolverine Development, taught me the real meaning of the phrase while he steered his decorative, electric Duffy boat through the lakes and rivers of Palmetto Dunes Oceanfront Resort, a 2,000-acre vacation and residential development on Hilton Head Island.

“’Halfbacks’ are snowbirds from Michigan who have tried wintering in Florida but decided to move…half way back. The heat, crowds, and busyness of Florida may have been too much for them, so they settled here in South Carolina,” explained Maguire. He and his wife Jeanne bought and renovated a canal-front home four years ago in the Palmetto Dunes Resort development, which is bordered by miles of Atlantic Beach border one side and an Intracoastal Waterway marina on the other. Maguire added a Jacuzzi and fire table to the swimming pool on their back patio, which is shaded, as is the entire resort, by large, lush trees and picturesque hanging Spanish moss. “You don’t get trees like that in Florida.” 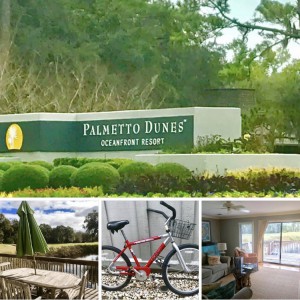 Homes like Maguires’ – plus golf course condos, villas, and beachfront hotel rooms – are also available for Palmetto Dunes guests to rent short-term or all-season so visitors can enjoy activities such as tennis and pickle ball, too.

Palmetto Dunes has 11-miles of inland, salt-water canals and lagoons for fishing and kayaking. During our twilight boat ride, which was like cruising through a “natural Venice,” Maguire pointed out spotted white-tailed deer, alligators, great blue herons, and egrets while consulting his handy bird-watching guide. 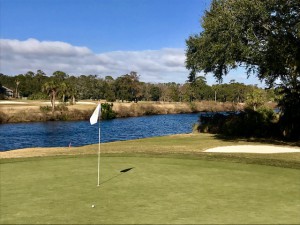 It’s not birds, but birdies, rather, that golfers like Keith and Joanne Froelich, of Okemos, are seeking on those aforementioned courses where they sink putts all winter while renting a villa at Palmetto Dunes. “I have also never found a better concentration of great restaurants anywhere,” said Keith, who recommended Sage Grill and Pomodori among his favorites – while Joanne keeps an eye on lively local entertainment, including “dueling pianos” and line-dancing at Poseidon, a waterfront bar in the Shelter Cove restaurant complex across William Hilton Parkway from Palmetto Dunes. Shelter Cove is also home to Hickory Tavern, where an MSU alumni group meets to watch Spartan games on television, according to Jan Ziegler of Delhi Township, who, with her husband Dave, has, for four years now, enjoyed Hilton Head all winter.

“It has fresh salt water air, palm trees, flowers and sun, but we chose the low country area instead of Florida because it has fewer people, not as much traffic, and is less costly. We pedal over the island’s 110 miles of bike trails and walk the beaches,” she said. “The area, including Savannah just 45-minutes away, is rich in history. We attend history and nature seminars at the Coastal Discovery Museum and Heritage Library, plus plays and performances at the Arts Center.”

Visit www.PalmettoDunes.com to vacation on Hilton Head or become a “half-back” by eschewing the Sunshine State in favor of SC.