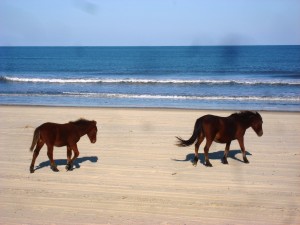 It’s the Outer Banks, not outer space. Sure the charm of the slender slice of sand sticking in the sea off of North Carolina’s Atlantic shore is its’ remote location, but that doesn’t mean it takes a spaceship to get there. A 90-minute drive south from the Norfolk airport in Virginia puts you in Kitty Hawk, NC, where the Wright Brothers historic first flight lasted 13 seconds. The National Monument there is well worth the visit. For an eight-dollar fee you can visit a flight museum, climb to a scenic peak, see replica aircraft, and stand on the very spot from which Orville and Wilbur’s experiment, minus any flight attendants, first class seats, or an in-flight entertainment system, soared. If you’re so inspired, you can even try it yourself. Kitty Hawk Kites, operating from Jockey’s Ridge State Park dunes just to the south, can send you on a 20-second, low-flying guided hang glide experience at 15-feet altitude after a one-hour lesson for about $100 (www.KittyHawkKites.com).

Neighboring Kill Devils Hills was recently seen on national television welcoming another airborne visitor – Hurricane Irene. While windblown news reporters were breathlessly talking about the wind while standing in the sloshing surf, the NBC Today Show’s weatherman Al Roker sought high ground between takes in the swell Sanderling Resort and Spa (www.TheSanderling.com). The Sanderling’s guestrooms and stylish, four-bedroom rental homes are both seaside and sound-side because the piece of land on which they exist, just outside Duck, NC, is so narrow that both the ocean and the massive Currituck Sound are steps away. Spa treatments can be performed alongside the lapping waves or in treatment rooms with windows overlooking the water. Uniquely suited for weddings, Sanderling swooners can get married on the Atlantic beach and then have a sunset reception on the sound. Then…right upstairs to let the honeymoon begin in luxury!

The sound is a playground for fishermen, boaters, kayakers, and even golfers, too, since both Currituck Club and Nag’s Head Golf Links play alongside it. Kilmarlic Golf Club, over the Wright Brothers Bridge on the mainland side of the sound, has hosted the North Carolina Open. (www.PlayOBXGolf.com) 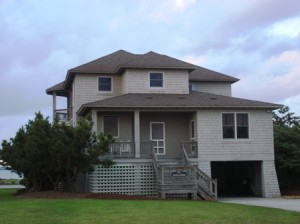 Rental homes along the beach and at The Sanderling at stylish and convenient.

Low-density rentals and an absence of high-rise hotels keep the 60-mile strand of beach and shore stretching across Currituck and Dare Counties natural and scenic. The most convenient way to be in the heart of nature is by taking a two-hour “Wild Horse Tour” adventure via Beach Jeeps of Corolla (SeeCorollaWildHorses.com). Highway 12 actually turns into a surfside, unpaved road, which allows you to follow the lead vehicle and drive a rented jeep in a convoy to Carova, a beach rental home community at the Virginia accessible only by sand streets. The homes, overlooking the shipwreck-strewn “Graveyard of the Atlantic,” share 7,500 pristine acres of dunes with not only memories of Blackbeard the pirate, but also 140 roaming wild Spanish mustangs, descendants of the horses brought from Europe centuries ago. You may rent a home or drive your own vehicle independently for a day at the beach provided it is four-wheel, not just front-wheel drive (www.ComeToOurBeach.com).

Casual dining in unique and colorful eateries such as Barefoot Bernies, Sugar Creek Seafood, and Currituck Barbeque Company offer a relief from the routine of chain restaurants, which are virtually and blissfully non-existent in the Outer Banks.