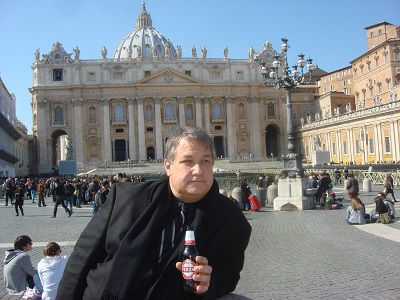 The expansive St. Peter’s Square at the Vatican, where Pope Francis is visible twice weekly, is a hub of activity.

The Michigan State Spartan basketball team is in Italy right now. Athletic Director Mark Hollis and coach Tom Izzo, in taking the team to Rome, Florence, Venice, and three other Italian cities, are in front of a travel industry trend. Data from international travel advisor Virtuoso indicates Italy is the most popular spot for luxury travel this autumn.

I would love to be with Izzo and the team right now, but in all honesty I would probably not watch one dribble of basketball. There’s so much history, cuisine, art and architecture…and so little time. In my estimation I find Rome more manic, congested and yes, dirtier than Paris (graffiti is a common sight), but I somehow find it easier to relax in the Eternal City. And let’s be honest, the language is so much more fun and effusive. Learn a little before you go, per favore.

If I could say “Arrivederci” and instantly transport myself to Roma now, you’d find me sitting at on a street-side patio of any small restaurant in the Spanish Steps area – with its’ gilded fashion shops on the Via Conditti – washing down bites of margarita pizza with vino. The tables are very close together so the “people listening” is as good as the “people watching.” Or you might check for me having thin spinach and ricotta ravioli – again with vino – at a place called “Chianti” adjacent to Trevi Fountain. My third choice would be Harry’s Bar on the Via Veneto, but that’s better with live music at night for a Bellini.

“Don’t bother choosing a bottle off the wine list at restaurants. Instead, simply order a carafe of the house wine,” says Tim McGuire, of Lansing. You will save a lot of money and more importantly get to sample some of the loveliest local, small vineyard wines you otherwise would not.”

Ron Farhat and his wife Pat, of Haslett, just returned from Italy and suggest the use of a pre-arranged, local guide, which saved them hours of waiting in line to experience “must sees” such as the ancient Roman Colosseum, Forum, Pantheon, Basilica of St. Peter, and the Sistine Chapel. “It’s not cheap but it is worth it for a few hours each morning,” said Farhat.

You don’t need a guide to see Pope Francis, though. Simply show up in the expansive St. Peter’s Square at noon on Sundays or get a free ticket for the Wednesday morning 10 a.m. audience. Check PapalAudience.org for free ticket details and potential dates when the Pope may be away.

Take a day trip, at minimum, via speed train from Roma Termini Stazione, to the visually stunning Florence where the eye candy that is the Duomo will defy you to break your stare, if only cast your eyes on Michelangelo’s “David,” and then maybe shop for gold on the Ponte Vecchio. You could even pop up into the Chianti region of Tuscany to visit a winery or market for part of the day.

In terms of Venice, East Lansing’s Jim Cash and his wife Carol Gruen visited the city of canals last year and were astonished to see how locals managed to walk on wooden planks over the flooded streets. Nevertheless they felt the scenic, if smelly, sinking city was well worth a day or two’s stay.

Michael Patrick Shiels may be contacted at InviteYourself@aol.com or via TravelTattler.com His talk show can be heard and seen weekday mornings in Lansing on 92.1 FM.