It wasn’t just the plate of caballo – roasted horse – sitting in front of me at El Patio, an open-air restaurant in Havana’s Plaza de La Cathedral that made the night in Cuba surreal. It was also the sight of the dramatic moonlight illuminating the crumbling Catedral San Cristobal – completed in 1777 and purported to, at one time, house the casket of Christopher Columbus – and the sound of the five classical musicians playing in the square. Beauty…sustaining…in a forbidden fiefdom left behind by time and politics. 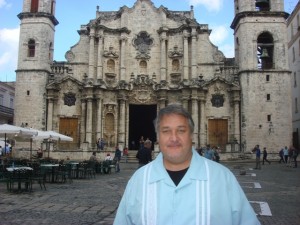 Havana is by no means a foodie destination, but I washed down the horse, (salty and served with beans, rice and plantains) with decent wine in an elegant atmosphere at a price tourists could easily afford but Cuban citizens could only dream of. I spoke with a young woman, a mother of one, who is employed in the communist system at a ration distribution center by day and works the streets by night. “There are two classes of people here. The government caters to the tourists, but doesn’t care about us,” she said. When I asked her if that bothered her, she answered, in Spanish, “How could it not?”

She mentioned that some of her friends would soon set sail in an escape attempt for the freedom of Florida by boat, so I inquired as to whether she planned to go, too? “No, no,” she said wide-eyed, making a biting motion with her fingernails. “Tiburon (trans: shark) chomp chomp!”

Despite the frequent “passing the hat” by musicians in every single restaurant, I never felt endangered or menaced as a tourist on the streets of Old Havana. My colleague Jason Pater, from Grand Rapids, speaks fluent Spanish and served as a capable translator, often abbreviating my adventure attempts with the line: “Mi amigo no sabe lo que esta hablando, su corazon es bueno, dejalo en Paz,” which he told me meant “My friend doesn’t know what he is saying. His heart is good. Leave him in peace.”

Cuban government penalties for disturbing visitors are severe, since tourism dollars account for 70-percent of the failing economy. Rather than displaying resentment, Cubans on the street seemed delighted to meet the rare “Americano” since, due to the U.S. trade embargo, “Yankees” without special permission are forbidden to visit Cuba or “trade with the enemy.” It is that half-century long embargo that Manuel Yepe Menendez, dictator Fidel Castro’s now retired protocol chief, blames, rather than their socialist system, for the island’s state of physical and economic disrepair. Menéndez, 75, was an original participant in the 1958 Cuban Revolution and served as a close ally to the Castro bothers and Che Guevara. He is one of the people authorized by the Cuban Government to meet with U.S. visitors. 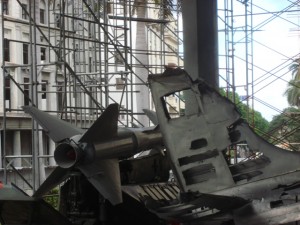 “Is there anything at all about our American ideals or activities that you do admire or at least appreciate?” I asked Menendez during a long (guided) drive to a tobacco farm in the countryside. After pondering my question for a moment, he answered, “Your movies. We love your movies.”

But don’t try to find a copy of Entertainment Weekly, or any newspaper or magazine while walking the cobblestone streets, for that matter. In a land that reveres American correspondent Ernest Hemingway, (his home Finca La Vigia, overlooking Havana, is a museum, while his favorite bar, the daiquiri-inventing Floridita, boasts a life-sized statue of “Papa”) newsstands are filled with only government history books about Chez Guevara, Jose Marti, and Castro. The daily newspaper, Granma International, prints slanted propaganda stories. One local equated Granma to toilet paper – also a luxury in Cuba. Someone outside the bathroom door will sell you a few sheets of tissue on your way in, and public toilets do not have seats. 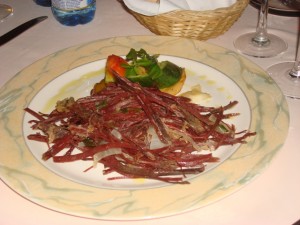 A plate for horse for dinner at El Patio, in Havana's Cathedral Square

It was also surreal to tour the Museum of the Revolution and quietly witness a ceremony during which a Cuban general presented an award to a citizen while the attendees, standing in perfect lines, shouted “Viva Fidel!” The museum featured, among other anti-U.S. exhibits, a replica of the missile the Castro regime used to shoot down an American U2 spy plane next to the burned wreckage of the aircraft. Still operating in Havana, though, are the American vintage cars: countless Buick, Oldsmobile, Chevy, Cadillac, Hudson, DeSoto, and even Edsel tail-fined beauties rolling through the streets, many touched up with house paint, and dating back to the 1920’s!

Before I boarded the flight back to Toronto, I sampled and sipped plenty of late night Mojitos, Cuba Libres, Pina Coladas and, as Fredo Corleone ordered in “Godfather II,” Banana Daquiris at The Nacional Hotel. A torpedo-sized Montecristo or Cohiba Cuban cigar, 35-dollars anywhere else and illegal in the U.S., is $5 in Havana…very affordable, for touristas, that is. 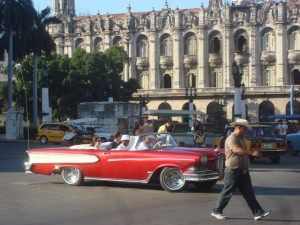 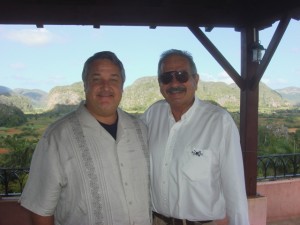 2 Responses to “INSIDE COMMUNIST CUBA – The Forbidden Fruits of Havana”