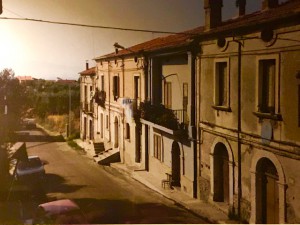 Italian brands are “tourist destinations” in their own right, and Vincent and Silvana Spagnuolo, both born in Italy, attempt to immerse their customers in an authentic “Made In Italy” experience at Spagnuolo’s – the restaurant they founded in Okemos.

Millennials, of late, have embraced the lure of Italian-made brands. Gucci sales, for instance, are up 49% this year. Versace, Ferrari, and Prada, for instance – are so strong that tour company IC Bellagio offers “Altagamma” behind-the-scenes manufacturing tours, lifestyle experiences and culinary outings in Italy.

“Our clients come to ‘live Italy,’ and enjoy true, customized experiences such as truffle hunting in Tuscany and mozzarella-making in Apulia,” says ICBellagio.com’s Andrea Grisdale. Chef Mario Batali will open an $106-million “Eataly” theme park near Bologna this month. 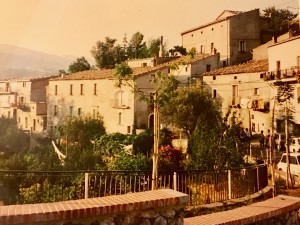 Spagnuolo’s authentic “Made in Italy” cuisine began in Altilia, a mountain village in the Calabria region. (Photo Credit: Amy Spagnuolo)

In the Lansing area, to provide authenticity without an airline ticket, Spagnuolo’s, a quiet, cozy “trattoria,” is managed by “famiglia:” the second-generation Spagnuolo children Salvatore, Amy, and Michael. The menu displays a vintage picture of Vincent’s parents and the warm walls display personal family photos: Vincent’s village of Sant’Ippolito; and a photo of Altilia, the mountain town in the Calabria region in Southern Italy where Silvana, whose maiden name is Ferrari, lived.

Amy used 18 rolls of film to shoot over 400 photos during her MSU foreign study throughout Italy, and posed for one in front of Bernini’s elaborate, fountain (circa 1677) at Vatican City’s Piazza San Pietro. “I chose and hung photos in Spagnuolo’s to represent major attractions in Italy,” she explains. “We’ve surrounded diners with the places people want to experience such as the Palio in Sienna; the Leaning Tower of Pisa; a chef in a Tuscan vineyard; fresh seafood on display; and the pretty bridges crossing the canal in Venice.” 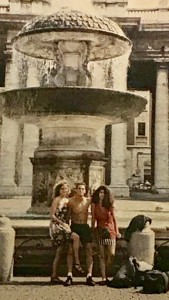 The most asked about photo is one she shot of colorful boats gliding over crystal blue water into a cave. “People want to know where that is. It’s the Grotta Azzurra,” says Amy, who, more than 20 years after taking the photo, took her teenaged daughter Sofia back to the Blue Grotto of Capri this summer on a trip that included visits to Florence and Lucca – the walled city on the Serchio River.

The restaurant’s warm setting is scored by a soundtrack of Frank Sinatra, who is revered by Italian Americans.

Regulars have learned to order dessert early because Silvana hand-makes only small batches of fresh cannolis  – she adds Marsala wine into the shells to deepen the caramel color. She was only eight-years-old when her mother and aunt taught her to cook in Italy. A family “test kitchen” experience determined her menu, including a Mostaccioli Gorgonzola added by Amy and the secret sauce Salvatore created for their popular pizzas. 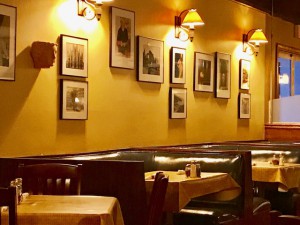 Father Jake Foglio, an Italian who, as an East Lansing Catholic priest, has spent lots of time in Rome, prefers, among other sophisticated items on the menu, the Pasta Carbonara, while world travelers Lee and Tundi Rigel, of Haslett, favor the Meatball and Mozzarella Bake. Gary Hutnik, a dentist and writer from Okemos, opts for Veal Marsala while his wife Julie swoons for Spedini. Guests can smell the aromas of Eggplant Parmesan; Baked Ziti; Spinach Manicotti; and Prosciutto-stuffed Chicken; baking when you step into Spagnuolo’s and imagine you’re in Italy. Spagnuolo’s, which also serves pizza and caters, is open for lunch and dinner on Grand River east of Marsh Road and just west of Meridian every day but Sunday.

Travel Writer Michael Patrick Shiels may be contacted at MShiels@aol.com  His radio program may be heard via MiBigShow.com  His latest book is “I Call Him Mr. President – Stories of Fishing, Golf and Life with my Friend George H.W. Bush”