When Billy Joel, on the stage a few weeks ago at Wrigley Field, warbled a few lines of the standard “My Kind of Town (Chicago Is),” he represented the feelings of people of all ages – from the foodies dining at Joe’s Seafood Prime Steak and Stone Crab, to the hip professional crowd swilling custom cocktails at Henry’s Swing Club and even the doll-toting darlings at the American Girl store in Water Tower Place. People come to the WindyCity, especially in the summer, for a combination of reasons, including thrills now that “Tilt” has opened in “Chicago 360,” the observation floor atop the John Hancock Building 1,000 feet above the Magnificent Mile. “Tilt” provides visitors the experience of standing against the window, holding on, and being gently tilted forward, along with the window, outside the building in order to look a stomach-turning straight down. The Willis (formerly Sears) Tower, just a block from the J.W. Marriott hotel in Chicago’s “Loop,” offers a similar experience from 1,353 feet up with “The Ledge” on its’ 103rd floor. 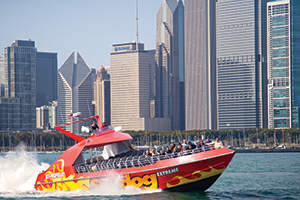 “We’re also directly next to Chicago’s elevated ‘L’ train,” says Steve Conklin, J.W. Marriott’s director of sales and marketing, who knows that while guests will be tempted make no plans and remain in the hotel – especially to enjoy the unique “Clarity Chamber” Turkish Bath in the 20,000 square-foot spa. Some like to be on the water and not just in it, so Sea Dog Cruises takes guests and their families from the carnival atmosphere of Navy Pier out into Lake Michigan and onto the Chicago River aboard smooth speedboats for stunningly scenic architectural tours, fireworks shows and thrill rides.

Exciting cocktails and a sense of sassy fun are presented at Henry’s Swing Club, a new, creative and casual bar in the River North District. With Michigan-native Michael Rubel serving as beverage director, the menu presents a Hamtramck Boilermaker and Corktown Swizzle. The very name “Henry’s is taken from a lyric about a Detroit bar in the John Lee Hooker song “Boogie Chillen.’” Maybe the most inexpensive menu in all of Chicago is one of the most whimsical, too: slider options include fried bologna; peanut butter and banana; fried oysters; and eggplant, to name a few, and you can roast campfire s’mores right at your table or even at the bar, for dessert after you play pool, Uno, or even “spin the bottle.”

Serious diners understand the 100-year legacy of Miami’s Joe’s Stone Crab, which is both honored and enhanced at its’ Chicago location on Rush St. “Chicago is a town known for its’ beef, so we give our guests the best of both worlds,” says general manager Eric Schuster as tuxedoed waiters dish out Madagascar shrimp, calf’s liver, and Joe’s famed key lime pie (though Mackinac Island Grand Hotel’s Ken Hayward prefers their Havana pie.)

Choices abound when you ChooseChicago.com

Michigan-based travel writer Michael Patrick Shiels may be contacted at InviteYourself@aol.com or via www.TravelTattler.com   He may be heard and seen weekday mornings in Lansing on 92.1 FM and Fox 47 TV.