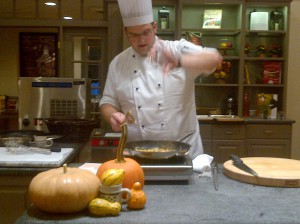 Travis Brust, a world champion chef, has a passion for pumpkins at Williamsburg

“I like to cook with pumpkin because it’s unusual. When people hear the word ‘pumpkin’ they get that fun, warm autumn feeling,” says Travis Brust, who won the 2012 World Chef Competition and was runner up the following year. He was displaying his “Passion for Pumpkins,” in “Taste,” his snazzy demonstration studio at Colonial Williamsburg in Virginia, where he serves as the historic resort’s Executive Chef. “Once people taste it when we add it to risotto and other dishes, they get more respect for pumpkin.”

“Pumpkin is light on flavor so it has more of an underlying tone, which is why it is often spiced. The membrane – or mush inside – is useless, except for the seeds, and has to be removed because it has a horrible flavor. After that a pumpkin is 95-percent water, so the ‘pumpkin’ you taste in a pumpkin pie is misleading because it is highly concentrated,” said Brust as he literally juiced a pumpkin to create Ginger-Pumpkin Cider. Onlookers at “Taste Studio,” on this particular night, watched Brust simultaneously also cook, and serve, Pumpkin Sofrito Crostini and Pumpkin Bourbon Ice Cream, and Pumpkin Seed Brittle which he created using Long Island Cheese pumpkins and pie pumpkins.

“The secret to a nicely textured brittle is air pockets created by adding baking soda,” revealed Brust, who served Fennel-Dusted Rock Fish with Oyster Stew to Queen Elizabeth in 2007 when Her Majesty, as millions do, visited Colonial Williamsburg and its’ preservation and restoration of 18th century, Revolutionary War-era life. “Taste Studio,” between the luxurious, tasteful Williamsburg Inn and Williamsburg Lodge, both adjacent to the 300-acre historic village, offers daily demonstrations of varying programs including, for instance, “What’s Shakin’ Bacon?” and “Holiday Jams and Jellies.”

“You’ll even find our chefs in the gardens telling our story,” said John Hallowell, Colonial Williamsburg’s President of Hospitality.

“We grow what was authentically grown in the challenging conditions of the Revolutionary period,” said Brust. “It wasn’t easy. When it took eight months to grow a single carrot, you were very careful not to accidentally burn it while cooking because it wasn’t so easy to toss it away and grab another.”

Daily historic recreations by actors who wander the village remaining in character put visitors back in time, including during meals at the various authentic venues – such as Shields Tavern or Christina Campbell’s. But modern comforts very subtly exist, including three splendid golf courses, a soothing spa, and conference facilities.

For more information on this fine family destination, which is 45 minutes from Richmond Airport (serviced by Delta Airlines), visit www.ColonialWilliamsburg.com