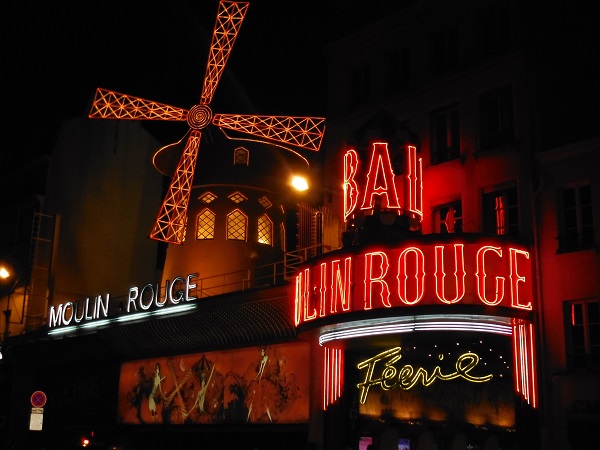 The historic, iconic Moulin Rouge theater in Paris not far from the site of the terror attacks. (Photo by Michael Patrick Shiels)

Chris Shepler was a long way from the Mackinac Island ferry company he captains when he emerged from the famed “can-can dancers” at the Moulin Rouge show in the Pigalle area of Paris last Friday night, but he was not far from Le Bataclan, the concert venue included in murderous terror attacks at multiple locations.

“The taxi driver taking us back to our hotel had the radio on very loudly, but it was in French so we did not understand it. When we saw 30 police cars racing around, the unknown became very scary for us,” said Shepler, who, traveling with his girlfriend, spent the rest of the night watching the shocking details unfold on television. “Our hotel was near the Arc de Triumph, which is normally a bustling area, but Saturday morning it was eerie to see there was not a soul on the streets.”

Shepler told me the couple secured a Delta flight back to the U.S. that morning, but their journey into Paris on Thursday had also been harrowing. “We took a high-speed train to Paris from Luxemburg, and just when the train was speeding up to 170 miles-per-hour a suicidal man threw himself – and his bicycle – onto the track,” Shepler said. Since the suicide did not occur at a road crossing, but rather, at an inaccessible location where the man had to tote his bike over a fence and climb a hill in order to reach the track, speculation is now that he may have been trying to derail the train. “We only heard what sounded like a bunch of gravel being thrown at the train. Then the train stopped and we were evacuated. We sat in the French countryside for six hours until a bus came and took us to a station.”

Ann Arbor businessman Ronald Weiser and his wife Eileen own an apartment in Paris, which they acquired as a family getaway while he was serving at U.S. Ambassador to Slovakia. “We’re planning to be back in Paris for the holidays. It may be the safest city in the world right now. They have increased security to levels greater than we have in our cities through the use of their military and their competent police force,” Weiser told me. “These attacks were directed at the French not the tourists. But the French are defiant and they are not going to let this alter their way of life. Two nights after the attacks they collectively opened their windows at 7 p.m. and played music in a show of solidarity.”

Detroit-area entrepreneur and University of Michigan Regent Denise Ilitch recently celebrated her birthday in Paris, visiting sights such as the Eiffel Tower, Cathedral of Notre Dame, and Four Seasons George V Hotel. She told me visiting the city was a “bucket list item” for her. “It’s hard for it to sink in. I am so sad and angry about it,” Ilitch said of the terror attacks. “It is a soulful city with a great, sometimes sad history. But the French are strong and resilient.”

The French government continues to operate in a state of emergency. The U.S. State Department strongly urges U.S. citizens to maintain a high level of vigilance, be aware of local events, and take the appropriate steps to bolster their personal security. Authorities believe the likelihood of terror attacks in Europe will continue as European members of ISIL return from Syria and Iraq.