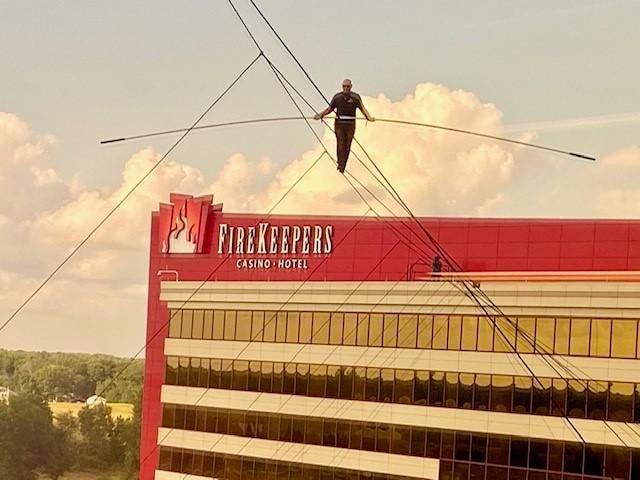 Wallenda prepared for this walk for days at FireKeeepers. (Photo by Harrison Shiels)

The 42-year-old Wallenda, of Sarasota, has been walking a wire since he was 18 months old and at FireKeepers was not protected by a net or safety devices. Crowds seated in bleachers near the hotel entrance at the base of the towers and onlookers in the FireKeepers parking lot first observed the ribbon-cutting and heard official executive remarks punctuated by a traditional Tribal drum ceremony. “We can think of no better way to signify moving forward than with Nik Wallenda’s aerial adventure across our towers,” said FireKeepers CEO Kathy George.

It was 5:45 p.m. when the spectators then looked skyward to see Wallenda, wearing black and clutching a long pole to aid his balance, step onto a wire stretched 150-feet high between FireKeepers’ original and new hotel towers. The cable was about the size of a nickel – 5/8’s of an inch in diameter – and, due to the position of the buildings, was not able to be steadied with 90-degree stabilizers, meaning the wire could wobble and shake, according to Wallenda.

“Whenever there is a big tower or structure in the middle of a field the wind is able to build up. There is nothing blocking the open wind so it can catch you off guard and be very dangerous especially at the center where the wind can get really whipping,” said Wallenda, who, due to his record-setting previous performances on network television, is known as the “King of the Wire.”

Wallenda’s great-grandfather fell to his death while walking between two hotel towers in 1978. “This is what my family has done for over 200 years and seven generations: walked on wires,” said Wallenda, who professed to praying before he stepped off the building. Halfway across the wire Wallenda knelt on the wire to clear his fogged sunglasses paused a couple other times. “There were a couple of gusts of wind so I had to stop for a minute, catch my balance a little and focus, and then I was able to proceed on. I am good at adjusting as needed. It went off without a hitch and I am safe.”

The biggest surprise for the crowds was the way they, through speakers, could hear Wallenda, who was wearing a microphone, carrying on a conversation with FireKeepers executive Jim Wise emceeing from the podium below. “I’m taking in the beautiful view from up here,” Wallenda said while carefully putting one foot in front of the other. He also talked about his newest book entitled “Facing Fear.”

I met Wallenda after he’d reached the roof of the new hotel tower and asked him why, after all of his success crossing Times Square; an active volcano; and Niagara Falls, he continues to perform risky stunts.

“I don’t need the money – I am blessed – but I enjoy it and am passionate about spreading a message of inspiration. With this pandemic we’re all walking on a wire these days, but even when you’re fearful you must continue to move forward and pursue your dreams.”

Wallenda walked between large FireKeepers logos atop both towers in the sunshine on the west side of the red and gold structures. The new hotel tower, a long-dreamed about major expansion for FireKeepers Casino constructed by Lansing’s Clark Construction, includes a gleaming new location for the casino’s gourmet Nibi restaurant with a private dining area; Gabi Coffee and Sweets location; a bustling lobby bar, and an expansive high-limit gaming space with the new Aurora VIP lounge. A large, artistic, metallic flame sculpture with fire and fountains fronts the new entrance and is visible to Nibi diners through floor-to-ceiling windows.