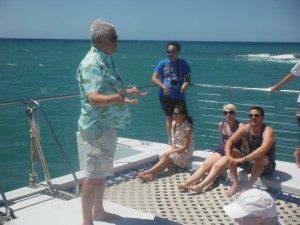 Griffin enjoys riding along onboard with international tourists to point out the sights and spin his adventurous yarns.

Shane Griffin is trapped on a desert island; essentially marooned in the South Pacific. His companions are dolphins, whales, parrotfish…and snorkeling tourists from locations as far flung as England and Thailand, on the day I met him. Griffin owns the Kai ‘Oli ‘Oli, a 40-passenger, power catamaran that can do 40 knots at full speed. It is his only viable route to escape – if he would dare to take it Transpacific, but it never goes more than a three-hour round trip up the Ko Olina Resort coastline, along the Hawaiian island of Oahu, three times each day as an OceanJoy cruise boat.

Griffin lives with a pulmonary condition that came minutes from killing him less than a decade ago. It’s ironic this was the closest call for a man who served multiple tours as a U.S. military pilot in the Vietnam War, then returned to the conflict to fly for the CIA, and later lived in the Middle East working as a commercial pilot for Saudi Arabia’s national airline. “Jeddah, Riyadh, yeah, it was certainly different,” Griffin admits of his time in the desert. After spending most of his life in the air – he then became chief pilot for Asiana Airways in the Far East – his medical condition now makes air travel, even as a passenger, physically impossible without great mortal risk.

“There are worse places I could be grounded than Ko Olina,” he jokes, allowing that captaining his snorkel and sunset cruises give him his “piloting fix.” “There are some similarities: safety checks, staying ahead of maintenance, minding the forecast and weather conditions, and providing passengers a comfortable experience.”

Memorable, too, in that OceanJoy’s enthusiastic crew members point out dolphins at play (guaranteed) and whales migrating (in winter months), outfit and guide snorkelers, serve lunch and drinks, and take photographs for the onboard vacationers as they splash in the crystal clear Pacific or pose in front of a sunset. “10 years ago when I spent a million dollars to customize, build and buy this boat, I made a commitment to doing things the right way,” said Griffin, who even provides his boat to the local Rotary chapter so they can hold their weekly meeting on board in Ko Olina’s Harbor.

He says it took him five years to turn a yearly profit. “I sat, docked, with my feet dangling over the side for much of the first year waiting for passengers,” he admits. But his boat, full of passengers he busses over from Honolulu hotels, too, is now almost always sold out (he limits the number of passengers to ensure a quality experience and be sensitive to the environment and “dolphin smart.”) Given Griffin’s aviation background he can’t help but point out, during the cruise, the scenic mountain passage through which Japanese zeros flew to bomb Pearl Harbor in the Second World War. He’s a former high-flier now stranded on the high seas and loving every second of it.

Michigan-based travel writer Michael Patrick Shiels may be contacted at InviteYourself@aol.com or via www.TravelTattler.com His radio show airs weekday mornings on 92.1 FM in Lansing.