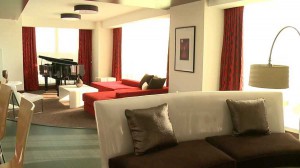 Entertainers can tinkle the ivories and tune up on a piano in a Firekeepers Hotel suite.

Hotel staffers and management are always on their toes when celebrities come to play and stay, but it turns out many stars are down to earth, according to Jeff LaFrance, vice-president of marketing at Firekeepers Casino, near Battle Creek. Show business performers have been “getting their Vegas on” frequently since Firekeepers opened their colorful hotel and 2,000-seat event center in late December, performing in the evening, spending nights in guest suites, and enjoying the amenities.

“Billy Currington kicked off his country music tour with a performance here and invited his crew and friends into his suite for an after-show celebration,” LaFrance recalls. “’Larry the Cable Guy’ was spotted using the public workout facility, side by side with hotel guests who’d come to see his show.”

All ‘Larry the Cable Guy’ asked for in his dressing room, in terms of star treatment, was Hooters-style chicken wings and Gatorade.

“It is assumed that the bigger the entertainer the more outrageous their requests will be. This is not always the case,” said LaFrance. “Martina McBride just asked for peanut butter and jelly with Dr. Pepper. Jewel traveled with her son so we needed to provide diapers, a crib, humidifiers and baby food. Jewel even performed her sound check with her son on stage with her, coaxing him to sing along.”

Firekeepers Casino had to be ready to give the royal treatment early on since Queen of Soul Aretha Franklin was one of the hotel’s first celebrity guests. But Firekeepers patrons even sometimes help roll out a proper Michigan welcome to the headline acts.

“On occasion we’ve been given various items to deliver to artists such as flowers, cookies and candy,” LaFrance reveals. “We’ve also been given a guitar-shaped, homemade cake for ‘Hall and Oates’ sporting ‘Halls’ Throat Lozenges and Quaker ‘Oates.’”

Of course the performers are provided extra security while staying at the hotel, and while some of them order room service for their meals, it would not be surprising to find yourself at a table – either dining or gaming – next to the likes of Don Rickles, Wynonna, Bob Eubanks, Martin Short, Gretchen Wilson, or musicians from Lynyrd Skynyrd, Kansas, or the Steve Miller Band.

Michigan-based travel writer Michael Patrick Shiels may be contacted at InviteYourself@aol.com can be heard weekdays mornings on 92.1 FM in Lansing.