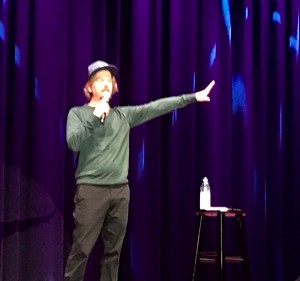 Comedic actor David Spade, who starred in movies such as “Tommy Boy” and on television’s “Rules of Engagement,” hit the stage at Firekeepers Casino Hotel in Battle Creek recently, but not before he sat down to dinner at Nibi, Chef Michael McFarlen’s snazzy gourmet restaurant in the casino.

“He’s got to eat, right? And he didn’t want to eat in his room,” revealed Jim Wise, Firekeepers’ vice-president of marketing. “He didn’t sit in the center of the room where everybody had to see him. He sat off to the side in the corner.”
Later from the stage of Firekeepers’ intimate, 2,000 seat showroom, Spade mentioned he’d dined in Nibi and liked it, so post-show customers bee-lined to Nibi and asked where Spade had been sitting. Deborah, a waitress proudly pointed out the table.
“Can you give me David Spade’s room number?” one pretty patron asked.
“I know it, but I cannot say it,” Deborah said with a dutiful grin.
It was a homecoming of sorts for Spade, who was born in Michigan.
“Not too many people know that. It was Beaumont Hospital in Royal Oak,” Spade recited. “I used to tell Kid Rock and Eminem I was from Michigan but I stopped when they got more famous than me.”
Spade claimed he’d traveled from his Malibu home (“or mansion, whatever,” he quipped) to Firekeepers via a flight on Southwest Airlines.
“It’s an airline that pretends it’s a real airline. Before you board they insist you wait while a crew ‘cleans the plane.’ But it’s really just a guy walking up the aisle spraying a can of Febreze to freshen the air,” Spade insisted. “And Southwest Airlines is somehow the ‘All Middle Seat Airline.’ I don’t know how that’s physically possible but it just seems like they have all middle seats.”
He insinuated the flight crew members were all sweaty.
“The airlines’ ‘hub’ – industry lingo – is in Las Vegas, so they’re hot,” he said before revealing he’d recently stayed in Vegas at the MGM Grand Hotel. “With thousands of rooms it’s the biggest hotel, but big is not always better. For instance, when you whisper your room number to a woman it’s not easy for her to remember: ‘Meet me in room B10247562_337 in Tower 2.’”
Spade then launched into two minutes of detailed directions on how to pass though miles of corridors of the huge MGM hotel to find his room. “When you pass the fourth bar and see a mile-long hallway which seems like you’re going into another building (because you are), you will reach an area which spokes into 11 passageways. Take the seventh one, which hairpins as if you’re backtracking to right where you started, and you’ll be halfway there.”Spade’s stylish hotel room at Firekeepers, needless to say, was much easier for him to find.
Since skiing is popular in Michigan, Spade commented on the sport.
“I ski like someone who is looking for their missing contact lens,” he said, with his head pointed down at his toes, which is a definite skiing technique no-no. “My friends try to ditch me on the slopes because they choose tough ski runs with names like ‘Devil’s Bottom’ and ‘Hitler’s Frenzy.’ I prefer slopes gentle runs with names like ‘Cotton Candy’ and ‘Pillow Town.’”
Firekeepers brings in celebrities from around the country and welcomes visitors from around the Midwest. Look for them on stage, in Nibi, or even at the tables.
Contact Travel Writer Michael Patrick Shiels at MShiels@aol.com  His radio program may be heard weekday mornings on 92.1 FM.  His latest book is “I Call Him Mr. President – Stories of Fishing, Golf and Life with my Friend George H.W. Bush”