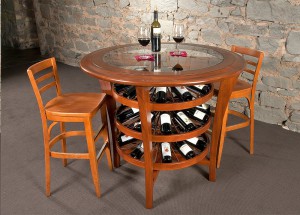 Revel patented “Lazy Susan” innovation in their wine tables or cellar corners can help the ambiance of a wine-drinking occasion.

“Good evening. Can I help you with something, ma’am?”

Sommelier John Jonna, Michigan’s original “Merchant of Vino,” stood tableside after being summoned by a woman dining at “Vinology,” the sophisticated (but not stuffy) downtown Ann Arbor restaurant he owns and operates.

“I was excited when I ordered this bottle of Muscadet…but it’s not as good as I remember,” she told him. “Can you taste it to make sure it’s not gone bad?”

Jonna, who has traveled the world studying and selling wine for more than 20 years, sipped some, swishing it around in his mouth and sucking in air to activate his palette. Nodding, he looked at the woman and asked her, “Ma’am. The last time you drank a bottle of Muscadet, was it in France?”

“Were you drinking it in Nantes, in the Loire Valley?”

She confirmed that yes, in fact, she was.

“Muscadet, as you know, is produced from vines in that region,” Jonna told her before asking, “While you were drinking the wine, were you eating anything?”

“Did the restaurant have a view of the moon shimmering on the Loire River?”

“It was a lovely view,” she remembered.

“Were you at the table with someone you cared about?”

Jonna paused, smiled slightly and nodded before telling her, “Madam, I can serve the same Muscadet, but I cannot reproduce the same moment.”

The moral to the story is that wine is “romance,” according to Jonna.

Jonna uses enthusiasm and education to take the “snobbiness” out of wine and delights in presenting tasting techniques and wine anecdotes to anyone who comes in the door for a formal tasting or otherwise. He tends to his other Detroit-area restaurants and wine bars while his children Vincent and Kristin (an MSU-alum who moved back from working with a major winemaker in Sonoma) operate Vinology on Main Street inAnn Arbor. Learn more at VinologyA2.com.

For safe sipping and tripping, Lansing’s DeanBlackCar.com offers car service – Cadillacs and Suburbans – to and from wine tastings at Vinology or meals at other restaurants for small groups and couples who are dropped at the door instead of searching (and paying) for parking in bustling downtown Ann Arbor. Locally Dusty’s Cellar, in Okemos, offers a similar zest for the lifelong passion of wine with varied tasting programs and dinners organized and hosted by proprietor Matt Rhodes, whose no-cost “Six for Sixty” wine club program has gone a long way to make high-rated wines approachable and affordable. See DustysCellar.com

East Lansing’s Jim Cash, who founded his internationally-renowned “Revel Cellars” custom wine-cellar company, is also one of the wine industry leaders and aficionados in the area dedicated to the growth of “the grape!” See his creations at RevelCellars.com