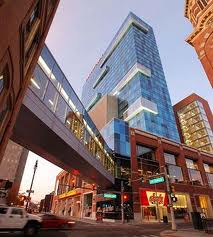 Leo Farhat Jr, owner of The Brunch House, in Lansing, needn’t fly back across the ocean to recapture the marvelous time he had in Greece this summer, though he’d like to. Instead he can jump on the highway for a “stay-cation” in Detroit’s Greektown district.

“I visited a village in northern Greece called Nymfaio for four days. The shop keepers and restaurant owners were very friendly and happy to see us. If I had the chance to visit there again I would have no problem extending my stay,” says Farhat, who traveled with friends in July. “All of the food was farmed locally as were the animals that were raised and butchered by the villagers.”

Farhat then went to Mykonos Island for a stay at the Panormas Villas, which were a short walk to the beach. “The food was delicious and I tried many things you could not get here in the states.”

Nevertheless, I found Greektown’s Santorini Estiatorio, at the corner of Monroe and Beaubien, the newest restaurant in Detroit to attempt to provide a very authentic Greek experience. Bright, white tablecloths contrasted with blue chairs evoked the Greek flag while classic statues, a boat hull, Grecian shutters and French doors opened the gold-hued walls to the sidewalk. We sipped Peloponnesse Skouros – a Greek white wine – on a sunny summer Saturday to wash down Saganaki, Moussaka, Pastisio, and Avgolemono (chicken lemon rice soup.) If you like, you can have Lavraki – the classic presentation of the entire fish.

Farhat, who hasn’t been to Greektown in a long time, remembers Hella’s Restaurant, which featured the entire leg of lamb. “The Bouzouki Lounge has belly dancers and there were coffeehouses where people would play Gin Rummy and a game called ‘Hand,’” he says.

There is plenty of other colorful nightlife and entertainment in the very walk-able three-blocks of Greektown. The unmistakable, blue, glass, 30-story Greektown Hotel provides 400 colorful rooms and suites, with floor-to-ceiling windows and plasma TV’s, starting as low as $129 per-night. It’s possible, in the winter, to valet park your car and walk, completely indoors, to the People Mover station in order to catch a hockey game or a show in another part of Downtown Detroit.

Historic Greektown was established by immigrants in the 1880’s and you’ll sometimes find musicians playing Greek music on the street in front of building designed to evoke the Parthenon and Pegasus. Monroe St. is draped all the way across from building-to-building with Greek flag banners giving the area a constantly festive atmosphere…without taking a flight!