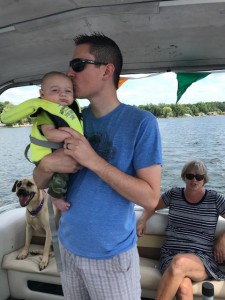 Safety first” for young and old aboard any type of boat

“Can a pontoon boat sink?”

I posed the question to Chris Shepler, captain of his family’s famed Mackinac Island Ferry service and presented him with a hypothetical nautical incident earlier this summer in Lake Michigan off Saugatuck. The skipper was too savvy, though, so he quickly asked, “Michael Patrick was this you we are talking about?”

It was, of course. I was at the helm of a pontoon owned by Lansing area friends who spend part of the summer at their Singapore Harbor, dock-front condo in Douglas across the river from vibrant downtown Saugatuck. They were on board on Independence Day, and there were two other souls on board – one from East Lansing and the other Williamston.

Fr. Mark Inglot, St. John Student Center’s Pastor, who was not on board, once described the pontoon boat as a “floating living room” when we’d steered her out the Kalamazoo River channel to watch a sunset on a placid Lake Michigan earlier in June. But on the sunny, windless afternoon of Independence Day, while cruising south along Lake Michigan just off Oval Beach, I spotted a pair of little twin swells toward us off the boat’s starboard side. With the engine running wide open, I followed my impulse to turn the boat bow head on into the rollers instead of taking them from the side. I thought it would be more comfortable for the passengers and I also thought it might be fun.

As I recounted to Shepler, the boat’s bow cut first little swell and it rolled under causing only a little dip. But the subsequent roller hit the bow like a bomb went off and shooting an eight-foot wall of water flying onto the boat and dousing its passengers.

“The noses of those pontoon boats have a tendency to dip down into the water a little bit,” Shepler explained.

The bow was listing forward under the water and entire deck was completely submerged under water for a short bit of time. The cooler was floating. Someone shouted, “We’re going down!” while another on board began to unpack the life jackets.

“What are you grinning about?” one of the more annoyed passengers asked me as she searched for her husband’s floating wallet.

“We’re not sinking,” I answered. Then I asked everyone to move to the back of the boat while I put the engine reverse to ease some of the water back over the bow and off the deck. “Pontoon boats can’t sink.”

Shepler later confirmed this fact in our discussion. “It’s very hard to sink a pontoon boat. Unless you pierce one of the pontoons – and even then it’s only going to list,” said Shepler, who suggested letting the roller come in from the side next time. “That’s what we do with the ferries. When we have eight-to-10-foot waves on the Straits of Mackinac we take the waves ‘on the beam,’ or, as well call it ‘putting the boat in the trough’ so there isn’t as much motion.”

He offered other maritime advice. “As a rule of thumb pontoon boats are really good on those inland lakes. But the big lake, even thought it might seem calm, can be touchy for those types of crafts. The big lake is for v-bottom boats of boats with a lot of free board for those waves out there,” Shepler advised.

When I told him the force of the lake water was so strong it blew the metal panel right out of the boat’s front door, Shepler simply nodded and said, “Sure.”

We returned safely to the Kalamazoo River and even moored at Saugatuck’s Red Dock bar for a drink before watching the Independence Day fireworks tied to the boat’s home mooring.

The moral of the story for vacationers who rent (or borrow) pontoon boats: take the waves “on the beam” instead of head on; slow the engine; even though a pontoon boat can’t sink, always have the life jackets handy on any boat; and consider whether a pontoon really belongs on a Great Lake – especially with me at the helm. Shepler’s Mackinac Island Ferry offers smoother, safer rides!