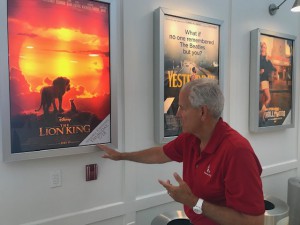 Three years ago in the middle of the village of Harbor Springs, Scott Langton opened a movie theater in the dawn of an era when viewers can, with the touch of a button, watch films on their phones – anytime, anywhere. He’s not worried though because the Lyric Theater has earned a starring role in town.

“People come with their families and it’s a cultural thing where they see friends. They come to see breaking, new, exciting movies and keep up with them. It’s a shared experience of laughter, fear, and the range of emotions motion pictures provide,” said Langton, who, as executive director, keeps his office filled with memorabilia up beside the projection rooms.

Other than selling out many of its old-fashioned, plush, velvet recliner seats at movie times, the Lyric Theater has community support.

“We all love Harbor Springs so a group of people came together and felt it would be important to addition to energize our downtown and help the schools,” Langton explained.

The non-profit facility on Main Street in a former Packer dealer and automotive service center was built with the generous donations of local residents. Though historical photos of the building adorn the lobby walls, the space is no garage now; the former showroom is now a showplace. Lyric Theater is spotless, stylish, and creative. This is no cardboard cinema where your feet stick to the floor. In fact, the floor of the 200-person screening room was laid to resemble lined look of Chris Craft boat and, on the walls, a nautical mural of the scenic bay on the walls immerses moviegoers. Look up and you’ll see the ceiling, an illuminated spread of sparkling, celestial stars, accurately depicting the actual night sky above Harbor Springs.

“The other seasons – winter and summer, are represented with murals in our 24 and 41-seat screening rooms,” said Langton. Each of the seats has a $1,000 donor nameplate on it – but every Saturday morning, cross-generational family fare is offered for 25-cents. Cinema concessions are famously expensive, but not at Lyric: organic popcorn with real butter and candy can be had for low as $3; soda for even less. Beer and wine are also offered and there is a focus on Michigan-made products like Bell’s Oberon from Kalamazoo, Wild Bill’s Root Beer from Northwoods Soda Company near Traverse City, and Tom’s Mom’s Cookies from right across the street. Langton has it down to a science and sells the most statistically popular snack items.

Michael Kernicki, general manager at nearby True North Golf Club, which is a decidedly seasonal business, frequents the Lyric Theater all year with his wife Teri and son Cooper. “It’s is a key reason why Harbor Springs has become a 12-month economy. Restaurants and shops are now open all year which is great for the community,” he said.

Lyric is a blend of an old-fashioned movie house with high-tech features. Vintage playbills from the Lyric’s past are displayed near digital “coming attraction” posters. The curtains sweep open to reveal the illuminated screen as the show starts. (Langton insists the audience must never be able to see the “blank white screen of death!”) But in practice the iconic romance of old-fashioned film reels don’t exist anymore. “The movies come in a very crummy box containing a metal case which we load into a digital projector,” Langton explained.

I asked him to name his favorite films. “’Sound of Music,’ and ‘To Catch a Thief,’ but I also love James Bond,” he admitted.