Shepler’s Mackinac Island Ferry in the straits connecting Lake Huron to Lake Michigan and the Miller Boat Line in Lake Erie are both historic, generational family maritime businesses. And though both ferry fleets transport vacationers to summer resort islands they are boats not buses…and there is a magic to boating that means the Shepler’s and Miller Ferries are in show business. 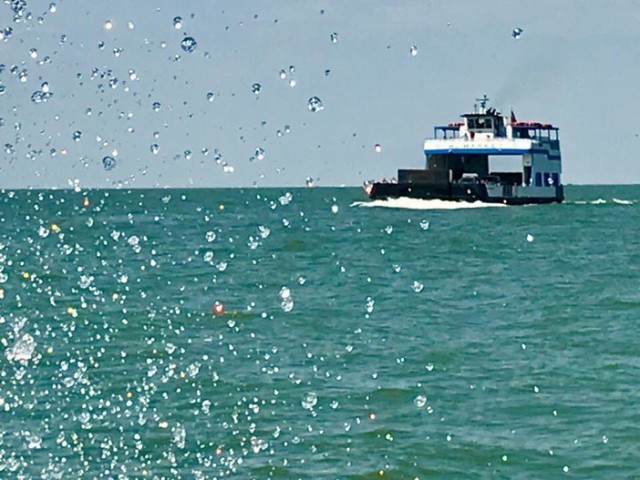 “When people come up from the cities and they’ve been grinding it out all week and the first thing they see is our gateway with the ‘Avenue of Flags’ and then crisp blue and white awnings along the docks they get excited to begin their adventure by coming aboard,” said Captain Chris Shepler, the current president and grandson of the service’s late founder William.

Shepler’s Mackinac Island Ferries have been floating folks on the 24-minute ride from Mackinac City and St. Ignace to the island for 75 summer seasons. When Shepler’s launched their first boat of the new season, Shepler chose, symbolically, the SS Hope from their seven-ship fleet to pull away from the dock and issue, via the ship’s horn, the official International maritime salute of “three longs and two shorts” which blasted through the morning fog.

“Our captain’s days start by checking the weather. What is the visibility like? We steam out past Major Shoal, which is a shallow part. Halfway across the strait the water is only 18-feet deep so there are two buoys there to mark the shoal which runs northeast to southwest. It’s usually wide open from Mackinac City to the shoal before we may hit the fog of Mackinac Island. The pilots also have their radar on and they’re listening on the radar for freighter traffic. They know the size, speed and direction of every boat out there.”

“When I was a kid in Harbor Springs I joined ‘Little Harbor Sailors.’ I had a dream of sailing in the America’s Cup and it came true. I made the team with the ‘Heart of America’ out of Chicago for the races in Freemantle, Australia and then sailed professionally around the world for a number of years.”

The operation of the Miller Ferry to the Lake Erie Islands is a family business, as well. And while the Shepler family is building a new boat – the William Richard, named after Shepler’s father – the Miller Boat Line also will soon add a fifth boat – the Mary Ann Market – to their four-boat fleet. Miller’s vessels range from 40-feet to 96 feet and can carry up to 26 cars and 600 people from the north end of Route 53 45 miles east of Toledo on an 18-minute crossing to the Lake Erie islands including South Bass Island’s “Put-In-Bay.”

“There is something special about a boat. Just the thought of being on the water has everybody looking forward to sitting on the upper deck with a little bit of breeze and seeing seven or eight islands along the ride plus seeing the seagulls and fishing boats,” said co-owner Billy Market. “An occasional 30-40 mile wind makes it a much more interesting ride.”

Though Market runs the Miller Ferry Company with his brother Scott and his sister Julene, Billy said a few times a month he still gets his hands on the helm. Their parents bough the Miller Boat Line in 1978 from the family who founded it in 1905 as an ice harvesting, charter fishing and water taxi business.

Put-In-Bay’s party and music reputation has it characterized as the “Key West of the Midwest,” but Market says the island is also family-friendly.

“You have your choice. You can also get a quarter mile out of town and sit on the beach and skip stones. We also have the Perry’s Victory International Peace Memorial commemorating the Battle of Lake Erie. Take an elevator to the top and you can see the surrounding islands, Cedar Point, and 40 miles all the way to Detroit and Toledo.”

Once on land day or overnight trippers to either Middle Bass or South Bass islands do not need a car as golf cart rentals are readily available dockside. There are also taxis and some just choose to walk. Mackinac Island does not allow cars but instead offers horse-drawn carriages. 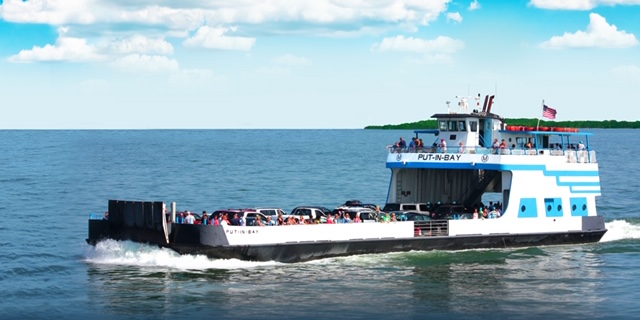 To book passage for a day trip or more on these Great Lakes ferries visit SheplersFerry.com or MillerFerry.com

Contact Michael Patrick Shiels at MShiels@aol.com  His radio program is heard weekdays at MiBigShow.com or in Lansing on WJIM am 1240 from 9-noon.