Disney coined the phrase “it’s a small world, after all” in its float-through theme park ride and the (maddeningly) unforgettable, repeating song which scores the classic attraction. The theme also plays out frequently though the guests on my morning radio program. 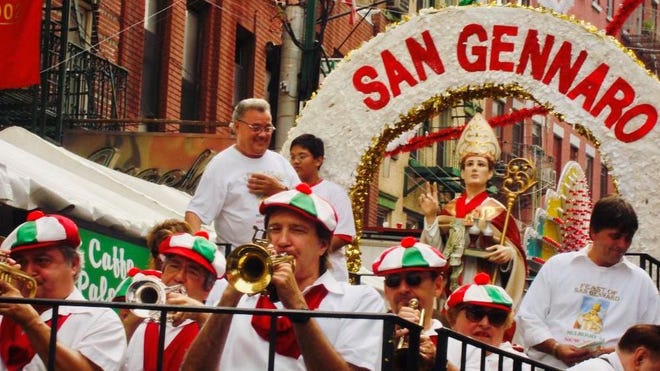 Little Italy in New York transports travelers into the movies, too. (Photo by: Harrison Shiels)

During a recent live radio broadcast I interviewed, via, telephone, movie and TV actor Robert Davi, who appeared in such smash hit films as “Die Hard,” “Goonies,” and the 007 movie “License to Kill.”

“I think I may have seen you once in Little Italy in New York. Did you possibly go right past me on a float?” I asked him.

“Yes, that was me. Wow! I was the grand marshal of the 2008 Feast of San Gennaro Festival,” he answered.

If you ever want to feel like you’re in a “Godfather” movie, Little Italy, especially during that event, is the place to do it. Scenes in two of the films were shot amid its old-fashioned Mulberry Street restaurants and storefronts.

“What a great piece of New York,” Davi confirmed to me, “but unfortunately Little Italy getting smaller and smaller over there. And by the way what was an Irish guy like you doing in Little Italy?”

Speaking of Italian restaurants, Davi, while playing the Bond villain in “License to Kill,” said the film’s producer Barbara Broccoli told him he could also have made a good 007. Broccoli is known to crave the cuisine of a cucina that came up in my recent conversation with CNN’s Clarissa Ward, who called into my radio show from London where she serves as the network’s chief international correspondent.

“If I were in London today,” I told Ward during our radio interview, “I’d go to lunch at La Famiglia in Chelsea.” The mere mention of the restaurant’s name drew from her an audible swoon.

“Oh my goodness. Oh, wow, I have to tell you I didn’t see that coming. La Famiglia is very much a favorite of my family as well. My mum used to take me there a lot when I was a kid.”

Marietta Maccioni, a friend of Broccoli, operates La Famiglia, a bright, traditional Tuscan restaurant with a “family kitchen feel” that was also often enjoyed often by Princess Diana. Ward, in her award-winning reporting, has traveled to Syria, Ukraine, Ghana, and Iraq. I reported to her, “I would fly across the ocean and back for another plate of La Famiglia’s rigatoni al gorgonzola,” I told Ward. (Prince Harry, when he lived in London, prefers the roast wild boar.)

Circling back to Davi’s assessment that I am an “Irish guy,” Ireland is attempting to reach across the ocean to its admirers who cannot fly there due to quarantines with tasty treats. Folklorist Billy Mac Fhoinn was on my phone line and surprised me during an interview by telling me he was calling from his home on the Dingle Peninsula, in County Kerry, which, after decades of annual visits to Benner’s Hotel, I consider to be my adopted “hometown.”

“I live just above Ballyferriter two doors from the church. We’ll have to have a pint at of Dick Mack’s Porter next time you are over,” said Mac Fhloinn.

Contact Michael Patrick Shiels atMShiels@aol.com His radio program may be found at MiBigShow.com or weekday mornings from 9-noon on WJIM AM 1240.