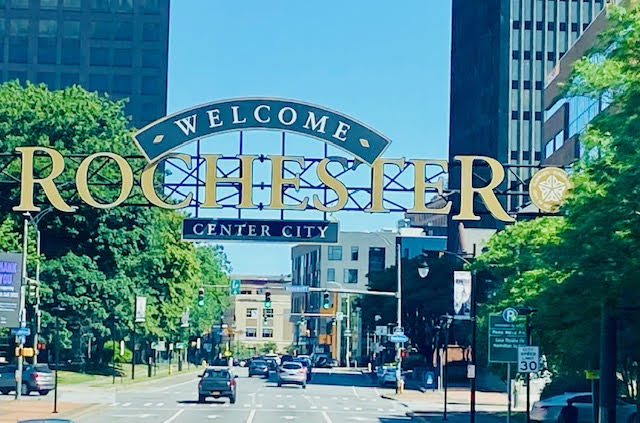 Rochester is an urban, suburban, rural and nautical experience. (Photo by Harrison Shiels)

Rochester, New York, can teach you a few things about how to play… literally. Rochester played on my mind after a recent visit to what I found to be a very pleasant urban, suburban, rural and nautical getaway within a day’s driving distance or a short flight over Lakes Erie and Ontario into Rochester’s gorgeous, easy-to-use airport.

The Strong National Museum of Play, a combination of art, history and science, is an entertaining, interactive cultural encounter with pinball machines, video games, and displays of nostalgic, vintage toys.

“People of all ages are instantly transported and gravitate toward a board game or toy they remember,” said Shane Rhinewald, spokesperson for the dynamic, visually dramatic museum which also houses the National Toy Hall of Fame and a full-sized Sesame Street set across from a child-sized Wegman’s grocery store. (Who didn’t play “store” as a kid!?) “Play is crucial because while kids learn and store information by playing we, as adults, need it, too, whether it’s interaction through golf or playing cards.”

As an adult I found plenty to play with throughout family-friendly Rochester. “We typically issue 150 festival permits each year,” said Don Jeffries, president and CEO of Visit Rochester. “And we’re surrounded by pretty water including the Erie Canal, Lake Ontario and the Finger Lakes.”

An expansive, Lake Ontario sandy beach and Irondequoit Bay abut the charming, circa 1879 playground known as Seabreeze Amusement Park – home to the “Jack Rabbit” America’s oldest continuously-operating wooden roller coaster, which has rolling and coasting about as long as Abbott’s Frozen Custard, founded in 1902 by Arthur Abbott who initially sold the treat at carnivals. I got my dish of it at the original location on Lake Ave. and ate it while walking across the street in Ontario Beach Park.

The Erie Canal and its waterfront boat rides, chic restaurants and shops was right beside my boutique digs – the Del Monte Lodge Renaissance Hotel and Spa near Oak Hill Country Club, where the 2023 PGA Championship will be played. I spent an evening downtown having a Zweigle’s red hot watching the Red Wings – Rochester’s minor league baseball team – play. The ballpark is just below the 19-story Kodak Tower, but I encountered real story of the Eastman Kodak Company can be encountered at the nearby George Eastman Museum – the playful home of the pioneer of popular photography. His elaborate mansion, and the historic home of civil rights leader Susan B. Anthony, are both open to Rochester visitors.

“Eastman’s home is lavish and gorgeous and shows his all his passions,” said the museum’s marketing director Eliza Kozlowski. Thanks to Eastman’s invention of the Brownie camera, which began making photography accessible to everyone, many of us now get caught “playing” with our phones. “Eastman would be thrilled to know all of us have cameras in our hand all the time now.” Just as Anthony, who was arrested at her house for voting, would be pleased to know, thanks to her initial efforts, women can now legally cast a ballot. The 19th Amendment, named for Anthony, passed well after she passed – in the same house Deborah Hughes, the Susan B. Anthony Museum and House’s president and CEO showed me around.

Were Anthony campaigning today she surely would gladhand at the decidedly unfancy Nick Tahou Hots, the 1918 downtown restaurant that created the Rochester area’s infamous “Garbage Plate” cuisine. The debate question “Have you ever eaten a ‘Garbage Plate?’ played a role as an authenticity litmus test in a recent NY State Attorney General’s race. (It’s a customizable combination of home fries, macaroni salad, baked beans, fries, and a choice of meats with spicy mustard, onions and hot sauce.)