I stood in the Devil’s Kitchen not for an actual meal but to savor a feast for the eyes with Zeb Miracle, a volunteer ambassador for Grand Junction’s Colorado National Monument.

The “monument” is a mini-Grand Canyon: 20,000 acres of canyons and mesas above the Colorado River – similar to a national park – established in 1911. Miracle and I had walked a mile-long trail from parking lot near the Monument’s east entrance to find ourselves all alone, but just 20-minutes by car away from Grand Junction, a fun and fresh community of 150,000 people at 5,000-feet elevation known as “Colorado’s Secret Adventure Spot.” My super-cool boutique Hotel Maverick back in town had a hot rooftop restaurant (in a true foodie town) called Devil’s Kitchen (of course they serve deviled eggs) named for the monolith in which we now stood in the shade. 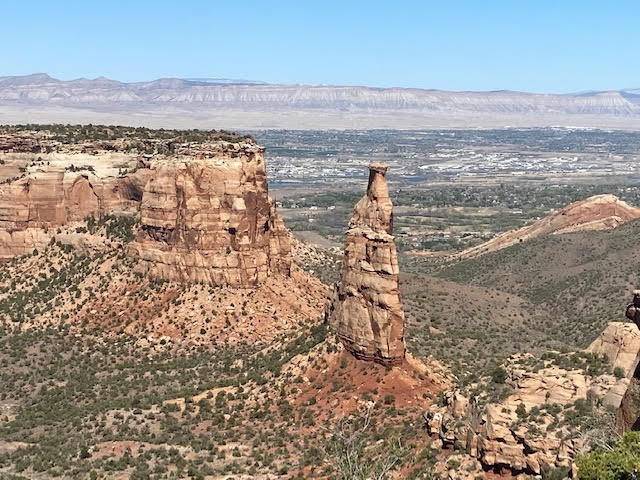 “We’re dwarfed in the middle of a collection of 60-foot-tall rocks that create this beautiful alcove of classic desert scenery: red sandstone rocks – dark and light shades of high contrast and a texture that is something to behold. These rocks were sand dunes 200-million years ago,” explained Sage, who also pointed out the smell of sage in the air and the soundscape of birds and breezes. “The feeling out here is magical. As we look straight up we see a beautiful blue Colorado sky; and as we gaze out we can see some pinions and Juniper trees and another layer of 1,000 cliffs.”

Those cliffs tell tales according to Miracle who then drove me up Rim Rock Road to a scenic viewing platform at Cold Shivers Point. “As you look down into this canyon and peer into the abyss you get cold shivers from looking straight down from 7,000 feet and from taking in the beauty,” said Miracle. But his origin stories of the cliffs gave be chills, too. “The earth is about 4.5-billion years-old – an amazing amount of time. The oldest rock we have here is about 1.5-billion years-old: the hard granite that makes up the bottom of these cliffs. The youngest rock we have here is only 150-million years-old – that’s during the age of the dinosaurs.”

The selfie I took perilously close to the edge became an even less significant snapshot in time as he continued.

“If you think of the history of the earth is a 24-hour clock, these 150-million-year-old rocks showed up at about ‘11:48 p.m.’ That’s how young – and how old they are. Humans, by comparison, showed up at ‘30-seconds before midnight’ on that time scale.”

Independence Monument, a 450-foot, slender, sandstone spire sticking up out of the canyon floor is arguably the star of the show – and so are those who dare to climb it. John Otto, the park’s first superintendent, first did it on Flag Day in 1911 by pulling himself up with spikes and, at the top, unleased a massive American flag. Miracle has similarly summitted but with a harness.

“You put your faith in your gear. It’s not easy to get used to but it’s okay to fall. Sometimes you just hang hundreds of feet in the air,” Miracle described and said while freestyle and traditional rock climbing and canyoneering are big in the park, visitors needn’t even get out of their car to enjoy world-class views. “23-mile-long Rim Rock Road was hand-carved to cling closely to the rim of the canyon. You feel like you’re in an airplane when you take that drive staring straight down thousands of feet. You can stop and take the short walks to some scenic overviews or there are trails that go for miles. There are guide services in town, or you can be all by yourself and take in the beauty.”

Trent Prall, Grand Junction’s public works director, detailed only a few of the area’s activities. “We have the mountains with the highest high alpine plateau in the world. You can be skiing in the morning, mountain biking in the afternoon and finish it off with a river trip.”

Golf will get you into the action, too, according to Sandra Weckerly at Redlands Mesa Golf Course. “We get people from around the world because it’s such a unique golf course. It’s a high desert course with a lot of high elevation drops off of the tees. Golfing here is like golfing in a western national park with coyotes, deer, bobcats and quail and sometimes bears.”