Longtime Detroit Lions quarterback Matthew Stafford, traded to the Los Angeles Rams, has his sights set on a competing in a Super Bowl in his home stadium – a venue visible from Spire 73, a sky bar reachable in 43 seconds aboard a high-speed elevator and secondary scenic glass elevator in the high-rise InterContinental Los Angeles Downtown hotel. Sofi Stadium, which opened in 2020, is 10 miles away and 73 stories below. 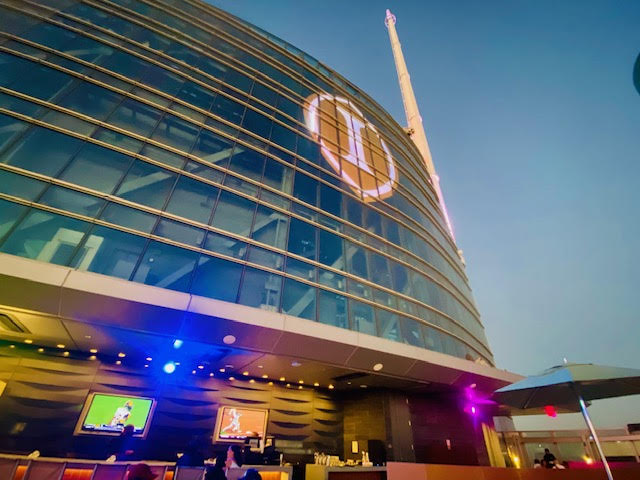 “You can see the beautiful SoFi Stadium looking south from Spire 73, which is the highest open-air restaurant and bar in the Western Hemisphere. It’s like you’re on the top of the world and you can reach out and touch the moon,” said Niles Harris, Area General Manager for the InterContinental Los Angeles Downtown. “The Super Bowl will be played there in February and our hotel will play a major role, as it does in any sporting event, political event or convention. It will be buzzing around here.”
The InterContinental already buzzes – it’s a property popular with celebrities, business leaders and star athletes who nevertheless value discretion. “We have starlight, private booths our exclusive, A-listers tend to like in our fine-dining restaurant Le Boucherie,” said Harris. He showed me the starlight booths in the Michelin and Wine Spectator-recommended steakhouse, which is infused with a French twist, and how they present the seated stars with a 71-story view of the Hollywood sign on the horizon.
“We’re fortunate to have a star quarterback like Matthew Stafford here leading the Rams. I’ve had a chance to meet him in the past. He is a most gracious and nice man,” said Harris, whose career path has given him experience at leading hotels across America involved with past Super Bowls, the Olympics, NCAA Final Four, and the nearby Rose Bowl which, were it not for the Santa Monica Mountains, would also be visible from Spire 73. (I was able to spot the InterContinental, though, from Downtown Pasadena.)

And from the InterContinental’s 70thfloor lobby l could make out many other L.A. landmarks including the Staples Center just below, Dodger Stadium, Beverly Hills and the ocean. Looking up from the check-in desk of the two-story lobby I saw artistic strings of colored lights dangling to evoke the trails of tail lights visible on tangled L.A.’s freeways below. A 20-foot mural at the block-long, Wilshire Blvd to Seventh Street, covered, ground-level valet entrance is also an homage to the famed traffic system. “Everyone in Los Angeles drives everywhere,” remarked Dana Debel, an executive with Delta Airlines who, like Stafford, relocated from Michigan to La La Land with her husband Howard and son Elliott.

Harris doesn’t worry about the traffic since he lives downtown and walks to his office at the InterContinental. “I love living in Los Angeles. The vastness and diversity here is so rich. You have the ability to be in the desert and then three hours later in the mountains or at the beach. It’s an amazing place with creative, different people, too. It’s a rich culinary repository with every cultural advantage and every major sport – though I haven’t been surfing yet.”

Stafford, a native Texan who played college ball in Georgia before 12 seasons in Detroit, likely has no surfing experience but he has been accepted for membership at prestigious Brentwood Country Club, where his young family can enjoy the facilities that come with the classic course.

In the off-season Stafford was photographed playing golf with Larry David, whose HBO show “Curb Your Enthusiasm” films in the club’s residential neighborhood. In a welcoming show of support Brentwood Country Club planned to shuttle a group of members to cheer on Stafford and his Rams when they took on his former team, the Detroit Lions. Brentwood CC’s Assistant General Manager Patrick Casey studied to be a PGA professional at Ferris State University in Big Rapids.

Back up at the Edward Delena-managed snazzy Spire 73, with its cuisine, craft cocktails, fire pits, water features, music and flat screen tv’s, Harris said sometimes an L.A.P.D. helicopter will fly up, pause, and the police will wave. “It’s a lot of fun and we make certain InterContinental Los Angeles Downtown Hotel guests can get a reservation.”