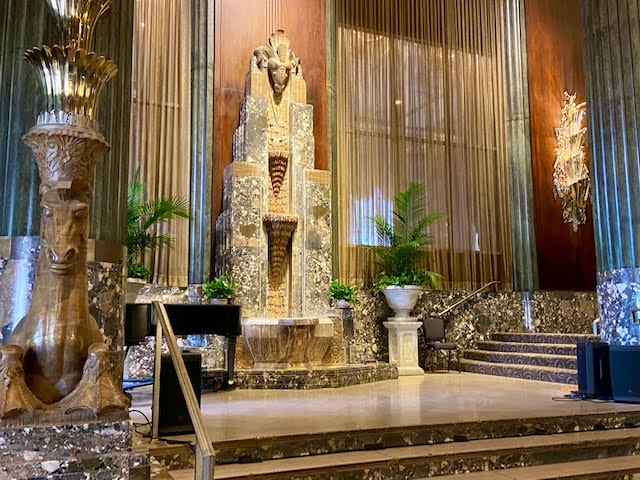 Circa 1931, the Hilton Netherland Plaza Hotel remains, itself a timeless tourist attraction. (Photo by Harrison Shiels)

Five freeway hours from Lansing I pulled into downtown Cincinnati at the border of Ohio and Kentucky on a summer afternoon. Visiting “Cincy” was a very user-friendly, quick trip.

“Cincinnati is a small town that has everything a big city has. It’s easy to navigate. Now that you’ve parked your car here, you’re able to walk to the attractions,” said Bob Louis, who met me in an attraction itself: the landmark, historic, Hilton Cincinnati Netherland Hotel. Louis has represented the hotel, which is authentically stylish but not snobby, for decades. “We get a lot of local people who bring their out-of-town visitors here just to show them our Palm Court Bar and have a drink or a bite.”

The hotel’s fanciful, civic-chic setting had a “Great Gatsby” aura to it. I felt as if F. Scott Fitzgerald’s bow-tied Jay Gatsby should be sitting in one of the chairs with a fan blowing cold air over a bowl of ice on him while his butler brings him a telephone telling him, “Mr. Gatsby? Cincinnati is calling.”

“We are a French Art-Deco masterpiece. Our ‘Hall of Mirrors’ premier ballroom was modeled after the Palace at Versailles. It’s got a beautiful, warm glow because there are 18-carat-backed gold mirrors,” Louis revealed. “And right here in Palm Court Bar these are 30-foot ceilings above Brazilian rosewood with 10 murals above that depict the French countryside and the pleasures in life: eating, drinking, poetry, music.”

Louis admitted at least one of those pleasures takes place before the nearby football and baseball games. “People come for pre-game drinks before our NFL Super Bowl Bengals kick-off. And we are the official hotel of the Reds – the oldest professional team in Major League Baseball.”

The Reds Hall of Fame maintains a hotel display window with rotating authentic memorabilia including, during my visits, jerseys from 1940’s.

That morning I’d spoken with Los Angeles radio and TV sportscaster Tim Neverett who was in town to call the Dodgers series vs the Reds after a long absence due to the pandemic. He even authored a book called “Covid Curveball” which examined the fan-less, 2020 Dodgers championship seasons during which broadcasters didn’t travel.

“I am very happy to be back in the ‘Queen City,’” he said. And during the radio broadcast explained, “When the Reds’ ballpark was first built there wasn’t a lot to do around it. But now there are lots of new apartments and with that comes restaurants, shops and bars.”

On my walk from the Hilton to what’s called the “Great American Ballpark,” I stopped in for a glass of wine at a local, classic favorite: the magnificent, dark-wood, cool, tiffany-glassed Jeff Ruby’s Steakhouse…with its tuxedoed waiters and $95 porterhouse prices. A Wagyu beef filet on the menu was $168. Tiger Shrimp cocktail: $8 per-piece.

By contrast, beers in the ballpark were $3; hot dogs $2; and ice cream $1 since it was Tuesday! At that price I bought the usher a hot dog too and drank a couple too many beers. For fun I considered how many steamed hotdogs would I have to eat to equal the cost of a Jeff Ruby ribeye!

Those prices and the ballpark feel were old school. Cincinnati loves being “old-timey:” The Reds jersey numbers are in a throwback typeface.  The team mascot, “Mr. Redlegs” is a character in knickers with a handlebar mustache. And the riverfront ballparks main feature is a turn-of-the-century centerfield steamboat with its two flame-belching smokestacks.

The unique statue out front of “Hit King” Pete Rose sliding headfirst into home plate is a hit with selfie-takers and better than the “Big Red Machine’s” World Series star being in the Baseball Hall of Fame, anyway!

Maybe just as on the other end of Jay Gatsby’s line, Cincinnati is calling you!

Contact Michael Patrick Shiels at MShiels@aol.com  His radio program may be found at MiBigShow.com or weekday mornings from 9-noon on WJIM AM 1240