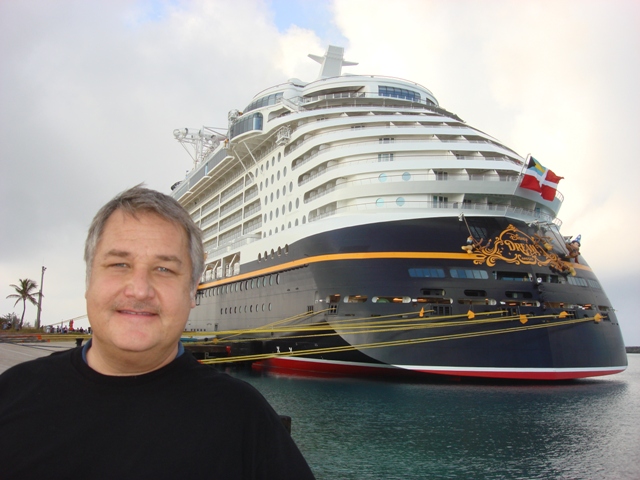 They lined up on the shores of Florida’s Port Canaveral inlet, sitting on the hoods of their cars cheering as if they’d seen a Space Shuttle launch from the nearby Kennedy Space Center or a fireworks show. But the only people who saw fireworks were those who actually went out to sea onboard the brand new Disney Dream cruise ship, which cruised by the festival-atmosphere crowd blasting the notes to “When You Wish Upon a Star” from its’ foghorn. Among those waving from onboard the Disney Dream’s christening cruise was Disney CEO Bob Iger, Academy Award-winning singer Jennifer Hudson, actors Whoopi Goldberg and John Stamos, and, of course, Mickey and Minnie Mouse. Even pirate Captain Jack Sparrow rode the Disney Dream into the Caribbean after its’ dramatic christening ceremony in the harbor during which a giant champagne bottle hanging from a helicopter was swung into the bow of the 1,115-foot long ship.
With 14 decks and a 4,000 passenger capacity, the Dream is the largest and most elaborate of Disney’s elite fleet, offering three, four and five-night Bahamian itineraries. Many modern cruise ships try to trump each other with outrageous on-board amenities, and Disney’s Dream certainly is certainly in the game: the grand Walt Disney Theatre seats 1,340 for sophisticated and fun live musical productions and the Buena Vista cinema screens films for 400. Six restaurants, including upscale gourmet dining experiences Remy and Palo, serve meals all day, but who can resist the self-serve ice cream and fountain pop machines near the pizza counter, especially when it’s all included?
The Nemo, Mickey and Donald Duck swimming pools cater to children and families, while the adults-only Quiet Cove pool and Senses Spa provide exactly what the names promises. Vibe is a supervised club with dancing, video games, movies and a pool deck for teenagers only; “tweens” get a playful club called Edge. The Dream also provides the It’s a Small World Nursery. Five themed nightclubs in a section on Deck 4 called “The District” rock at night.
The see-through aqueduct tube that sends water cascading around the smokestack and upper deck is the “Aqua Duck,” the world’s first shipboard waterslide-coaster, at one point looping thrilled riders 12 feet over the side of the ship with a view of the ocean 150 feet below!
All Disney ships stop at Castaway Cay, an idyllic private island with splendid beaches, boating, waterslide, yoga, dancing, biking, and an expansive natural water world where snorkelers can discover sunken sights, for instance, the old submarine formerly used in Disney’s “20,000 Leagues Under the Sea” ride. Your only consolation when its time to leave Castaway Cay is that you get to be back onboard the ship. The Dream’s three-story grand lobby is ornate, fanciful and elegant. Thanks to the luxurious classic architecture, the entire ship evokes feelings of nostalgia for the romance of long-ago ocean voyages mixed with old Hollywood. In the subtleties of the design Disney’s tasteful touch is ever-present, including animated artwork that comes to life and virtual portholes. “Even in an emergency, there’s Mickey,” noted my 14-year-old son Harrison, who noticed the iconic, mouse-shaped directional paddles during the lifeboat drill. Disney characters are constantly available for photo-ops on board. The sophisticated surprise is that a Disney cruise is all things for everyone – minus a casino – and so much more than the common perception that it is a noisy, kitschy, floating amusement park. In private, most of the cabins and staterooms have ocean views and balconies, making the sea ever-present in your adventure.
The Disney Dream is a quality experience worth saving and gathering a family for. Log on to www.DisneyCruiseLine.com