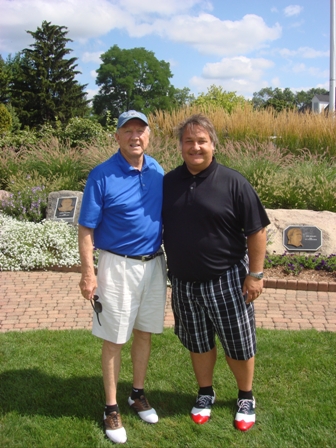 Baseball star Al Kaline found himself in the late morning sunshine at Michigan’s Oakland Hills Country Club, but looking at his watch. He was about to play golf with me in the Ilitch Charities fundraiser, but had to be downtown at the ballpark for that evening’s Detroit Tiger game. While I was growing up, Kaline, who is 76, partnered with the late George Kell, as color commentator on Tiger television broadcasts.

“Well I don’t miss being on TV,” Kaline countered, “and I really don’t miss all of that travel.”

It is one thing for Kaline to fly at his leisure to his home in Southwest Florida for the winter, which he does October through April, but quite another to be sent to places like Arlington and Kansas City in the heat of summer on Tiger road trips.

“Even here at home in Detroit my wife has to remind me I’m not as young as I used to be.”

Kaline, right fielder for the 1968 world champion Tigers, said, as a player, he enjoyed traveling to New York. “I loved playing in Yankee Stadium. I always wanted to play in the biggest market against the best team. Plus, they had all those great left-handed hitters, so I knew I’d get some action in right field.”

Kaline, who collected 3,007 hits during his 22-year career, wore a cap bearing the logo of Leatherstocking Golf Course. I asked him where Leatherstocking was, and he was due the smile he gave when he answered, “Cooperstown.” Kaline is, of course, enshrined there at the Baseball Hall of Fame in that upstate New York town.

Due to his reputation and longevity, Kaline’s been in the unique position of meeting other sports celebrities during his travels. “I’ve meet Jack Nicklaus and Arnold Palmer. I got along well with Arnold. He was warm and friendly,” said Kaline. “Jack was colder to me. He wasn’t nearly as friendly. But that’s okay.”

Oakland Hills was full of celebrities that day, including former National Hockey League star Darren McCarty. McCarty, the Stanley Cup with the Red Wings, smiled broadly at every word Kaline said to him on the terrace following the round.

While McCarty played more recently in the big money era of sports, don’t worry about Kaline, who once famously refused $10,000 extra in salary after what he considered a sub-par season. “I make more money now from my Major League pension than I did when I played,” he admits. “I don’t blame the players for their big salaries. It’s not their fault.”

While Kaline is friendly, he is not animated. During the round, I tried to loosen him up with a practical joke by sneaking a rubber snake on the floor of his golf cart. After he climbed into his cart and noticed the rubber snake by his feet, he reached down, picked it up, held it in two fingers and looked at me coldly.

“I guess that’s a pretty funny joke, Michael Patrick,” he said, “but you probably didn’t know that my brother died from the bite of a poisonous snake.”

The other players in our group went silent and awkwardly looked at their shoes as my stomach dropped. In my ignorance, I’d obviously been very insensitive. As I struggled to apologize, Kaline grinned and laughed. “Aw I didn’t even have a brother!”

Gotcha! It was like old #6 threw me out at home!

Michael Patrick Shiels can be contacted at MPSbigshow@aol.com or via www.TravelTattler.com