Care to do some winter camping in the great white north?

Filming in the frosty forests of Canada was rough enough, but the character of Glass, having been left for dead after a bear attack, endures, while crawling and covering 200 miles, being shot at by both the French and Indians; being half buried; a broken ankle; punctured organs, gaping wounds and slashed skin; malnutrition; heartbreak; riding a horse off an escarpment; and falling into icy, raging rapids.

Dr. John Dery is an emergency room physician at Sparrow Hospital in Lansing. “You have to love Hollywood for telling a good story. The amount of trauma that was taking place at the same time he was battling the elements was overwhelming. You have a greater than 85-percent chance of dying if you have a concurrent trauma because it prevents your body from healing and stops it from responding the way its’ supposed to,” says Derry. “As for his frostbite, you saw Glass laying his bare back against a rotting animal carcass. The carcass had a lot of maggots throughout it, which are known to eat infected and dead tissue. Believe it or not we still use that method in modern medicine.”

What about Glass surviving the bear attack to begin with?

“A grizzly bear is one of the most aggressive animals you can encounter, especially one with cubs,” says Richard P. Smith, an outdoor writer and author of “Understanding Michigan’s Black Bear.”

The single shot Glass fired initially only enraged the bear. “Glass had no choice but to try playing dead. Curl up in a fetal position and put your hands around the back of your head; very often that will work,” explains Smith, who has done some bear hunting in Alberta. “The bear may bite and test you, and you may experience some injuries, but the injuries won’t be as severe as the ones you’ll get if you try to fight the bear.”

To survive, Glass munched on whatever he could find, including raw fish, bone marrow, and the liver of a freshly killed bison.

“In that day and age it wasn’t that unusual to eat raw meat and foods since they may not have had access to cooking or even fire,” says Smith. “In a survival situation you’re going to eat what you can.”

“Buffalo liver has a sweet, meaty flavor and is very delicious and lean,” says Holly Arnold Kinney, proprietress of The Fort, a popular Denver-area restaurant which serves bison liver cooked…and raw. “Eating raw liver has saved many lives in the 19th century. It’s chewy raw, but still has a sweet, fresh taste full of minerals and iron.” 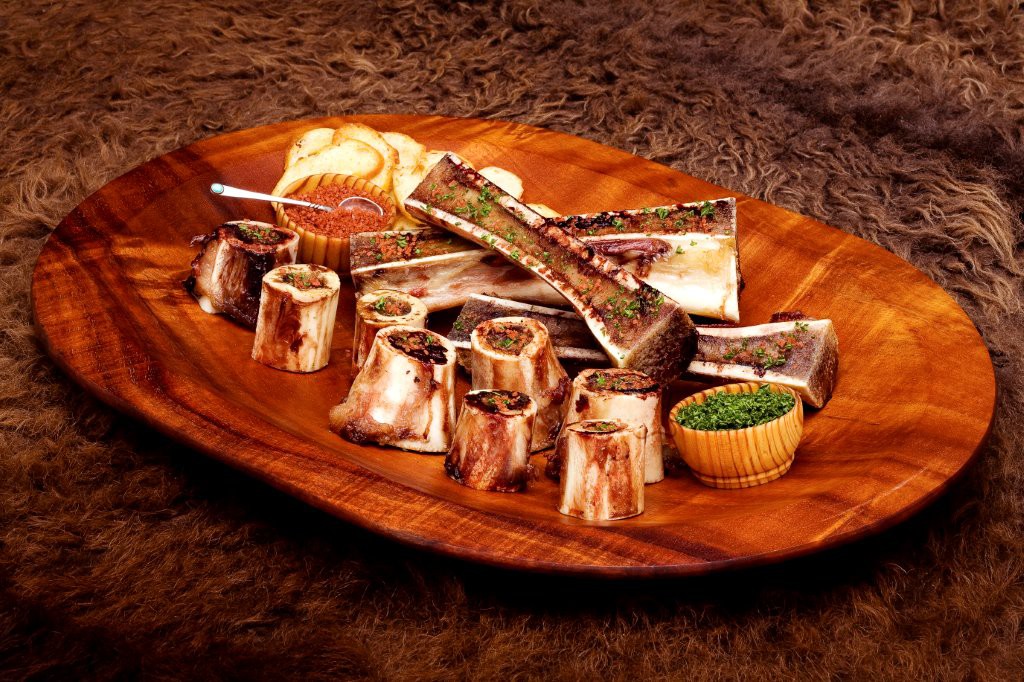 COURTESY PHOTO: Hugh Glass ate bone marrow to survive. Denver diners can have a dish of the delicacy

The Fort’s menu includes buffalo tongue, bison sausages, Rocky Mountain Oysters (bull testicles) and buffalo bone marrow, too. Dr. Jim Hanson, who served on set as a technical advisor to ensure historical accuracy during the filming of “The Revenant,” will be guest dinner speaker at The Fort on March 20.

Michael Patrick Shiels can be heard weekday mornings in Lansing on 92.1 FM. He may be contacted at InviteYourself@aol.com and read at TravelTattler.com