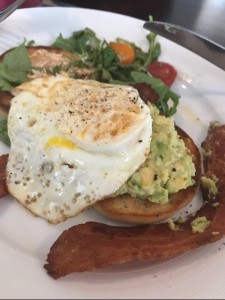 “Any time you’re in Maine with your family it’s a prescription for joy,” former President George W. Bush told me as I sat across the table from him on the porch of Kennebunkport’s Cape Arundel Golf Club. The 43rd President, who plays regularly at the course (which is open to the public) when he’s in Kennebunkport, then referred to the health scares his parents, former President George H.W. Bush and Barbara Bush, each in their 90’s, endured over the winter. “For a while I didn’t think I was going to be able to see my parents again here in Maine, but they have defied expectations. They’re very resilient people. So Maine is a joyful place.”

A large number of extended Bush family members, including #43’s daughter Jenna, who appears on NBC TV’s “Today Show,” and her two toddlers, stayed at the family’s generational, oceanfront homestead,Walker’s Point, which is visible to tourists from an observation area on Ocean Avenue, for Father’s Day weekend.

Other visitors, not in the Bush family, were in the quaint town for “Launch: A Maritime Festival,” an annual event celebrating the history and seaside culture of the picturesque area with a five-day series of charming events including a boat parade, lobster bake, Captain’s cook-off, rain gutter regatta and more.

The snazzy, boutique Boathouse Waterfront Hotel, in the heart of the upper village and Dock Square shopping and dining area, had the most panoramic views of the boat parade and harbor from its guestroom balconies, windows and the outdoor deck at David’s KPT restaurant. The Boathouse manages to maintain the marina’s nautical authenticity, but in sleek, a contemporary fashion that doesn’t evoke thoughts of Long John Silvers. “Sometimes hotels lean too far to either side in terms of themes. Being too contemporary can make guests uncomfortable. We worked to find the perfect blend to match the atmosphere and capture the essence of Maine without making guests feel like they’re in the bottom of a ship,” said Justin Grimes, director of operations for the Kennebunkport Resort Collection.

Similarly, in the lower village, vacationers enjoy chic style, luxury linens, Vera Wang mattresses, and in-room fireplaces in a classic yet artsy, New England “bed-and-breakfast” called the Inn at English Meadows, which David and Kate Parisi bought and renovated as a “second career” after moving up from Connecticut four years ago. “We’d stayed at a lot of ‘b-and-b’s’ which were nice, but we wanted this one to be special. We include beautiful amenities to create an experience for guests even nicer than where they live,” said David, who assists his wife Kate in serving some of the breakfasts (and blankets when needed) in the outdoor garden courtyard.

“I observe the guests and develop a custom gourmet breakfast each morning,” Kate explained. “I decide whether they are an ‘egg white’ or ‘pancake type’ of crowd. Our avocado, bacon and egg sandwich on an English muffin with marinated tomatoes seems very popular.”

With boating, the Bushes and restful romance as some of the attractions, Kennebunkport, Maine is 80 miles north of Boston and a leafy 30-minute drive from Portland International Jetport.