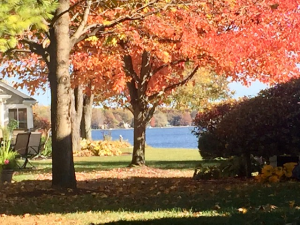 Nugent returns to his “sacred grounds of Michigan” each autumn. (Photo by Harrison Shiels)

Ted Nugent, known as the “Motor City Madman,” is mad at Michigan. The Redford-born rock star lived in Jackson for years but now resides in Texas, and refers to Michigan as a “once great state.” He’s said “lying, corrupt, backstabbing, America-hating punks are running the place.”

“But I terminally love the water/winter wonderland so much I will never stop identifying the cockroaches that are destroying my beloved birth state and turning her into a suburb of San Francisco,” said Nugent, who nevertheless will open with six shows in California during his new 13-city tour; a tour which will conclude with one show in Michigan on Aug. 31 at DTE Energy Theater in Clarkston.

Nugent, in an interview with me, decried the Flint water crisis and the poor condition of Michigan’s roads, but his main source of angst seemed to be the Department of Natural Resources.

“The DNR used to oversee the number one hunting state in the nation. There were more family hours of recreation, more revenue generated, billions for mom-and-pop businesses,” Nugent bemoaned. “I am a ‘Michiganiac’ and will always be one, but I live in Texas where everything I do every day, from the time I wake up until the time I go to bed, is legal…but against the law in Michigan. If I have a beaver ruining my driveway in Texas I do what any thoughtful person would do: I shoot the damned beaver. In Michigan I am not allowed to. In Texas I hunt doves and when I shoot a sand hill crane I show respect for it by eating it.”

Nugent, 70, said he hunts daily and returns to his “sacred Michigan grounds” every hunting season every September, October, November and December.

“After my primal escape in nature, after that peace and sanctuary, I can’t wait to put my .22 caliber rifle or bow and arrow down and grab a guitar and try to be Little Richard,” he explained. “If you walk in the wild as a conscious, thinking predator and go slow and absorb your surroundings it will cleanse your soul. So when I pick up that guitar and I crank up the amplifier (much to Mrs. Nugent’s chagrin, by the way) I just let these licks rip.”

Nugent, who has sold more than 40 million albums, is careful to point out his iconic Gibson guitar was created in Kalamazoo, Michigan. He was in Grand Rapids with Donald Trump the night before Trump was elected President, but Nugent refers to another republican candidate Mitt Romney – a Michigan native – as a “tie adjuster.” And Nugent has this to say about fellow Texan Beto O’Rourke, the former congressman who recently campaigned in Michigan for the democratic nomination for president.

“If you examine his credentials you may have an aneurism. He is a manifestation of a cultural abandonment. If you vote for him the whole country will turn out like Michigan.”

But for Nugent, who said he’d love to run against Gary Peters for U.S. senate but his wife won’t let him, there’s still no place like home.

“I am so terminally in love with Michigan I am so proud to be the ‘Motor City Madman’ bringing forth the unrivaled soulfulness and musical dedication of the Motown Funk Brother and Bob Segar and Mitch Ryder and the Detroit Wheels and all those amazing Motown gods of thunder,” he insisted. “I am convinced the majority of the great families in Michigan – with spirit and attitude – are my blood brothers. They’re the greatest, most caring, loving, generous, hardest working people in the world.”

Nugent’s concert tour schedule can be found at TedNugent.com.