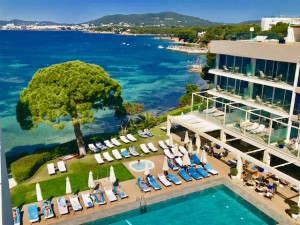 ME Ibiza resort’s pool is right on the Mediterranean and another is on the roof. (Photo by Harrison Shiels)

Four Alpha Epsilon Pi fraternity brothers, having just graduated from the University of Michigan, decided to reconvene for a collegiate “debrief” only three weeks after commencement ceremonies in Ann Arbor. After four years of cohabitating on campus, Harrison, Ben, Larry and Benji – who in their post-graduate professional pursuits will disperse to be based in Los Angeles, Miami, New Jersey and Madrid – wanted to keep their frat house fun going just a little longer, so they convened in Ibiza. Ibiza is a small island 60 miles off the southeastern coast of Spain and is the planet’s best party destination, according to MadeForSpainAndPortugal.com, the region’s award-winning international custom tour operator. 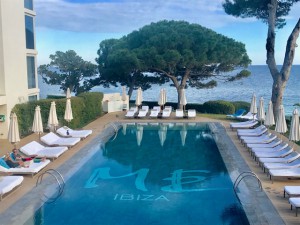 Poolside at ME Ibiza. (Photo by Harrison Shiels)

“Ibiza is where everybody wants to be seen and enjoy the music and beauty. The party culture intensifies after dark, but Ibiza is also famous for beach clubs with day parties. You listen to good, chill music during the day and then dance at 2 a.m.,” explained Rene Hoeltschl, general manager of ME Ibiza resort hotel. Pache is the original Ibiza nightclub and Hi Ibiza is also very popular. Hoeltschl pointed to the panorama of the Mediterranean Sea and Balearic Islands below from “Radio,” the rooftop bar and restaurant of ME Ibiza, his stylish, contemporary boutique beauty. The midday electronic house music was already pumping from a poolside DJ four stories below and next door at Nikki Beach. “This is where the music was born, when the first important DJ’s came here to create their music and take it all over the world.” 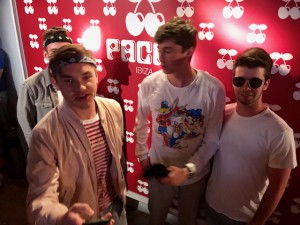 After a late night and lay-in (even though they were four-to-a-room) the lads consumed the lavish ME breakfast buffet, including Spanish meats and cheeses, and washed it down with flutes of Prosecco. It was the trip’s last day – after a big night – so the lads then sought the serenity of ME Ibiza resort’s rooftop sundeck and pool bar next to the open-air, scenic spa area, and sleep it off.

After seeing the Mediterranean all afternoon between sleepy dozes, they decided it was time to get into the sea somewhere also quiet. On advice from the ME’s concierge, they drove 15 minutes north of the resort to Cala Mastella, a hidden, rocky, tree-lined inlet with a tiny beach bar. 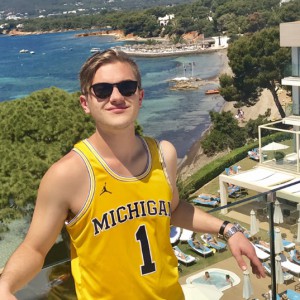 Wolverine alumnus Harrison at ME. (Photo by Harrison Shiels)

They splashed and swam and tossed around a University of Michigan rubber football. And when they climbed on the boulders to skip rocks into the sea, these newly-graduated collegians, these highly-educated young men headed into the professional world, these masters of their universes…were just being boys again.

Later, in the twilight, it was Benji’s turn to fly away first. After a quiet 30-minute drive to the airport with awkward small talk, his frat brothers stood at the departure curb outside the airport bidding adios to him before his evening flight home to Madrid.

Benji then, diplomatically, with handshakes, offered each of them an encouraging personal thought.

“Many are envious you get another year in Ann Arbor,” he said to Larry, who was heading back to Michigan alone to finish up his business studies.

After hugs Benji walked into the terminal and they slumped back into the rental car and shut the doors.

“Man, that sucked,” Ben admitted to the other fellows.

After a few quiet seconds, Harrison steered the car away and broke the silence.

“You think the next time we see Benji he’ll be a boring old man?”

“He kind of already is,” Ben answered.

And with resilient laughter, the grads headed to the seafront Blue Marlin outdoor nightclub to keep the party going on their last night in Ibiza.