Magical Miami Beach is full of Michigan connections starting with the Cadillac Hotel and Beach Club – an art deco gem in the heart of the action bordered by Collins Avenue on one side and the bright beach and shady walking path on the other. Antione Cadillac, who founded Detroit in 1701, could, in his day, never have dreamed of the luxury provided by the circa-1950s hotel. In the years since many have made their way, in name or in person, from Michigan to Miami Beach. 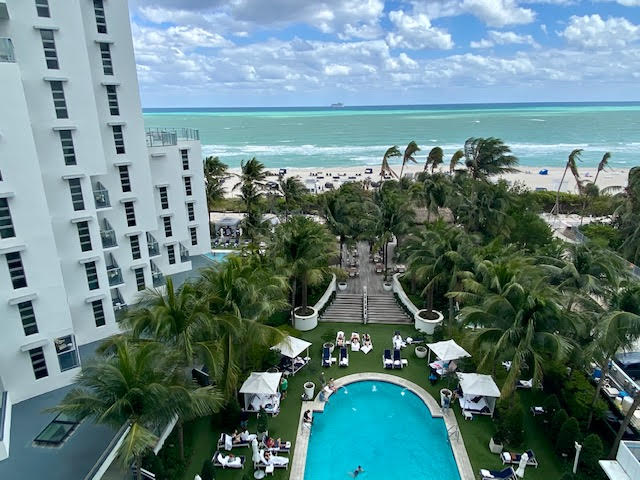 The Cadillac Beach Hotel and Beach Club is named for Detroit’s founder. (Photo by Harrison Shiels)

For instance, according to Brian Johnson, longtime general manager of the iconic Joe’s Stone Crab, a former Detroit police sergeant once served as the famed restaurant’s maître d – which is perhaps the most popular and powerful unelected position in Miami.

The most powerful elected official, Miami Beach mayor Dan Gelber, revealed another connection. “We have a lot of Michigan influence here, including my daughter who is a junior at the University of Michigan. She is up there and is happy and as cold as can be,” he joked.

Wolverine alum Desmond Howard, who won the Heisman Trophy wearing the winged helmet, played in the NFL, and is now a sports anchor for ESPN, makes Miami home. U-M alum Stephen Ross, a successful developer who is the largest single donor in the university’s history, owns the NFL’s Miami Dolphins.

“Many people don’t know Stephen Ross grew up here and went to Miami Beach High School,” said Nat Moore, who played 13 seasons for the Dolphins. “He’s making sure the Dolphins are an integral part of the community.”

The Cuban community is an important facet of Miami’s culture and Cuban-born Enrique Sosa, who lives on Key Biscayne, still spends his summers in Michigan where he worked for a decade as a high-ranking executive at Dow. “I spent 15 years of my life in Midland and we still have a summer place on Lake Charlevoix. We’ve been going there for 37 years,” said Sosa. “Here in Miami the Little Havana area on Calle Ocho gives you a taste of Cuban culture with a lot of good food and shops.” Calle Ocho offers live music, cigars, and people watching.

But if you want to see a human carnival of the exotic and eccentric South Beach takes the cake. And none of the colorful bars and restaurants there on Ocean Drive are as colorful as The Palace, which offers fanciful street-side drag shows. It’s owned by Tom Donall, a Lansing native who also owns Spiral in Old Town. Admittedly he, himself, is about the only thing South Beach and Lansing have in common. “It’s a whole different vibe. People from around the world come here to vacation. Lansing is more like a family and a home and you get to know people.”

Steve Farrell’s home is the Miami Beach Golf Club, where he serves at director of golf, but he was born and raised in Kalamazoo where he caddied at the country club, became golf professional and then moved to Miami in 1990. “I make my way back to Kalamazoo to see my mother and family each summer when I know it’s going to be nice and warm,” said Farrell who stargazes at his course, which is open to the public. “We get all sorts of celebrities and sports stars who come here to play golf. We’re a part of South Beach and everyone is welcome.”

Miami Beach has welcomed many Michiganders – and the Cadillac Hotel and Beach Club is ready for those who want to dive into the fun for a while.

Contact Michael Patrick Shiels at MShiels@aol.com. His radio program may be found at MiBigShow.com or weekday mornings from 9-noon on WJIM AM 1240