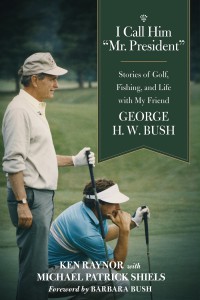 “I Call Him Mr. President” released this week by Skyhorse Publishing

You cannot schedule a weekend getaway to Camp David – the Presidential Retreat in the mountains of Maryland – or book airfare there aboard the Marine One helicopter. The Lincoln Bedroom at the White House does not show up as available on AirBnB; and no amount of frequent flier miles will get you even a middle seat aboard Air Force One. An Uber a ride in the Presidential limousine? No chance. But you can live those experiences vicariously in the new book “I Call Him Mr. President – Stories of Golf Fishing and Life with my Friend George HW Bush,” by Ken Raynor and Michael Patrick Shiels. I collaborated with the 41st president’s longtime fishing pal and golf professional Raynor over the past few years to research and write the book. It’s believed that Raynor, head pro at Cape Arundel Golf Club, near the Bushes’ seaside summer home in Kennebunkport, has played more golf with Presidents of the United States – given Bush’s son also became Commander in Chief- than any PGA professional in history.

For vacationers to Kennebunkport, Cape Arundel Golf Club is open to the public, and the Bushes’ home on Walker’s Point is an attraction visible from a viewing area along Ocean Avenue. Raynor takes us right inside the Bush’s living room, aboard his speedboat, into the White House swimming pool and everywhere the President Bush welcomed him – in “I Call Him Mr. President.”

Fishing trips, including the two of them alone in a tiny Bass Tracker boat on the Kennebunk River at dawn or fly fishing expeditions to the Arctic Sea by float plane and through the wilds of Newfoundland via helicopter, are detailed. President Bush and Raynor were guests at the very private Augusta National Golf Club, and Raynor coached the very nervous 41st President to hit a ceremonial opening drive in front of a crowd with Tiger Woods near Washington D.C.

Bush entertained plenty of celebrity friends along the way, so stories from Prince Andrew, Jack Nicklaus, Larry Gatlin, VP Dan Quayle and many other notables who contributed anecdotes to the book, are included.

“President Bush, at the end of our round of golf in Maine, insisted on giving me the dollar I’d won from him in a gentleman’s bet on the course. I wanted him to autograph it but was concerned that somehow defacing federal currency was a crime, so I didn’t ask him to do it,” says NBC’s star sports commentator Jimmy Roberts. “Someone hearing this story later reminded me, ‘President Bush was accompanied all that day by two Secret Service agents who work for the Treasury Department…’  All I needed to do was ask one of them if it was legal and I probably could have had the dollar signed that day!”

Word got back to President Bush, so he had Roberts mail the dollar to him, which he signed and sent back with a fun personal note.

From “shirts and skins” wallyball games against the Secret Service agents at Camp David to trick or treating with First Lady Barbara Bush (who wore a Barbara Bush mask), “I Call Him Mr. President” is meant to be a fun and touching portrait of what it’s like to be pals with “the Prez.”

Join Michael Patrick Shiels for a brief, complimentary presentation of colorful insider tales and book signing at Schuler’s Books at Meridian Mall in Okemos onWednesday, September 13 at 7 p.m.  He may be contacted at MShiels@aol.com