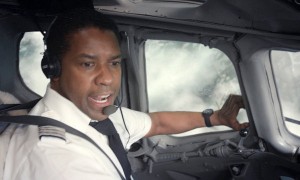 Audiences have filled the theaters to see the new Denzel Washington movie “Flight,” but it’s doubtful they would buckle in for a flight captained byWashington’s character, pilot Whip Whitaker. He managed the launch the plane through a fierce morning thunderstorm above Orlando for an on-time takeoff, but somewhere on the way to Atlanta, the jetliner lost “elevator control” (the flaps on the back of the tail) due to a mechanical difficulty, sending it diving toward a heavily-populated suburban neighborhood.

Awakened from his cockpit nap, Whitaker, who’d snatched three mini-bottles of vodka from the flight attendant cart to cure his hangover, kept his cool. To the astonishment of his whimpering, young co-pilot, he saved almost every soul on board by dumping the fuel and rolling the aircraft to fly upside down at 500 feet until he could find a field, roll the plane back over, and crash land. The miracle touchdown made Whitaker a Sully Sullenberger-type hero, until incriminating results of the hospital’s blood-alcohol test reached the NTSB and the airline’s insurance company. Still, dozens of subsequent pilots in the film failed to replicate the crash landing on a simulator (though, albeit, they were sober when they tried it.)

The events depicted in the film are entirely possible, according to Ace Abbott, a retired pilot and author of “The Rogue Aviator: In the Back Alleys of Aviation.”

“Rolling the aircraft upside down is very plausible. It was the only escape the pilot had since the elevator problem was pushing the plane into a dive. Therefore, once he ‘inverted’ the plane its’ nose came up since the stuck elevator flaps pushed the nose in the opposite direction.”

Abbott found watching the film emotionally draining because he says the cockpit scene was spectacularly directed…with a little added drama.

“The drunken pilot character was radical. There are some pilots that are alcoholic – hopefully very few,” Abbott explains. “But captains have a lot of power, and depending on the social dynamic of his crew, he might have been able to get away with that. But I have never heard of a pilot actually drinking on the job.”

The possibility got even slimmer thanks to random drug testing of pilots and flight crew after a 1990 incident in which three Northwest Airlines pilots got prison time for flying a 737 after a layover during which they consumed, collectively, 15 rum and colas and six pitchers of beer the night before a 6:30 am flight from Fargo.

“It turned out some of the passengers had been partying with them at the bar,” says Abbott. “More proactive techniques now prevent a drunken pilot from flying. Gate attendant and flight crew will intervene even if they think a pilot is hung over.”

Michigan-based travel writer Michael Patrick Shiels may be contacted atInviteYourself@aol.com or via www.TravelTattler.com