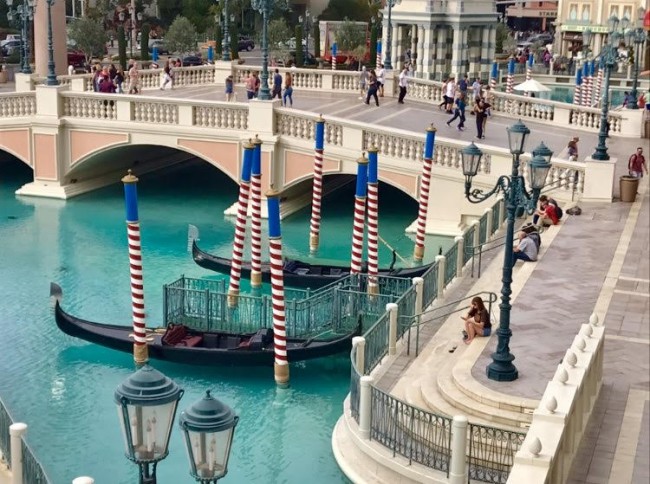 Venice at Vegas – the Venetian Resort and Palazzo provide an Italian-style spree. (Photo by Harrison Shiels)

On Easter Sunday three generations of gentlemen – my father, my son and I, were in a casino ballroom telling gambling stories. The topic and location may seem unusual for that holiday were it not for the fact the decorative Easter buffet at Firekeepers Casino in Battle Creek is a celebrated culinary event filled with fun which families hop to each year, as is the Firekeepers Mother’s Day spread. Even a fourth generation was anted up when my father, between bites of carrot cake and chocolate eggs, told a Las Vegas tale about his late dad.

“Your grandfather pressed and doubled up a $5-dollar, 15-1 win by rolling a second consecutive 11…then he told the crap table croupier to let the $1,280 ride for again to try and roll a third 11! The pit boss exclaimed, ‘Hey Zeke, are you trying to own the place?’”

My grandfather, Art Shiels, while babysitting my brother and sister and me, took us to “see the horses” at Windsor Raceway every summer Friday night on the way to a weekend at his beach cottage on Lake Erie in Colchester, Ontario. (In Florida we visited Disney World but also the Derby Lane dog track near Tampa.) Those paycheck-denting perfecta bets nevertheless inspired me to one day travel to Churchill Downs in Louisville to experience the mint juleps and big hats of the Kentucky Derby.

My grandmother, Helen, would be waiting for us at that Canadian cottage for a kitchen table, penny poker game. She was a travel agent, so our 18th birthday gifts were one-day junket flights to Atlantic City, New Jersey. We may have seen the boardwalk but I vividly recall splitting aces at the Showboat Casino.

Christmas cards always included scratch-off Michigan Lottery tickets – the first of which I was given as a tip while working the coffee concession at the Oak Club Bingo Game in Wyandotte…the same city in which my mother won the $15,000 Grand Prize in the raffle at the our Lady of Mount Carmel Polish Parish Festival. And speaking of the lottery, an $80-million winning Powerball ticket was recently sold at the Barrels and Barrels Party Store in Suttons Bay – as if traveling to Michigan’s bucolic Traverse City-area wasn’t lucky enough!

When my son Harrison was a toddler, his grandfather Art Shiels Jr., known as “Butch,” sometimes held him while playing Hoyle Casino virtual video games on his I-Pad. One day with little Harrison, perched on my shoulders during a walk to Detroit’s Thanksgiving Day Parade through Greektown, caught a glimpse of the glow of slot machines through an open door, pointed, and yelled out in his little voice: “casino!”

When he turned 8 I took him to Las Vegas with my brother Robert, who is a television weather forecaster who can also accurately predict how most poker hands will turn out. While Robert played Texas Hold ‘Em at Caesars Palace Harrison and I splashed under the waterfalls in the swimming pool at the luxurious JW Marriott Summerlin, went up to the top of the Stratosphere Tower, watched the pirate ship and erupting volcano on the Strip, and stood under the acrobats swinging over the casino floor at Circus Circus.

By age 18 Harrison finally placed his first legal bet…sitting next to me in a tuxedo at a baccarat table in, of all places, the gilded, ornate Casino Monte-Carlo in Monaco – on the world’s most famous felt tables. It was a lot more glamorous than the time I bet on Thai boxing in Bangkok.

I had to smile five years later when Harrison called me from Los Angeles moments after taking the post-graduate LSAT test. “Dad my friends and I need to celebrate tonight. We found some $80 flights to Vegas so we’re going to the Palazzo at The Venetian to blow off some steam,” he pronounced.

As the Firekeepers Casino Easter Brunch wound down my mother Gladys was heading toward the slot machines until her grandson Harrison stopped her and said, “Hey Granny, how about you come over here and let me teach you roulette?”