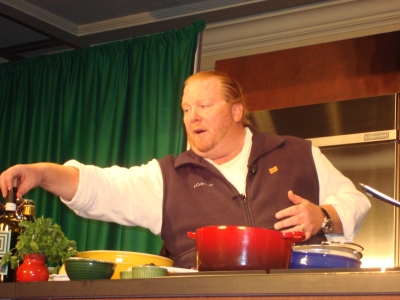 Celebrity Chef Mario Batali appears on ABC TV’s “The Chew,” but he can be spotted in Michigan each summer since he spends each July and August in a fish camp he bought north of Traverse City over a decade ago.

“I am in Michigan because I love it. It is a fantastic place. It’s not the hullabaloo of New York. As an evangelist for Northern Michigan, I tell people, ‘Listen, if you want to wait in line and you want to be where everyone is, don’t come to Michigan,’” Batali told me. “But if you want to go to a place where they are unique, independent thinking, really smart people living in one of the most beautiful, unheralded, amazing, places around the world, come visit me in Northern Michigan.”

Batali, easily recognizable with his ponytail, vest and trademark orange Croc shoes, frequents area restaurants, including Grand Traverse Pie Company. I asked him if waiters and chefs get nervous when they see the star parks himself at one of their tables?

“I am probably the easiest restaurant customer because my favorite thing to eat is anything someone else makes, so I am already predisposed to having a good time. As a general rule when I walk into a restaurant it’s not because I want them to prove anything to me, it’s because I am dying to see what they’re doing,” he said.

What etiquette does he prefer and advise, though, when other patrons or locals spot a celebrity in their midst?

“The best thing to do is to introduce yourself and say hello. A lot of people come up and say, ‘uh, I am not normally like this, but can I take a picture?’ without even introducing themselves or saying ‘hello.’ Or, they come up and want a ‘selfie’ and say ‘let me take a picture,’” Batali revealed. “If they’d just say ‘hi I’m Wilma Flintstone from Bedrock and I’d love to say “hello” to you,’ I’d say, ‘of course I’d love to meet you.’ Come on over!”

But when, Chef Batali? “If we’re in the middle of a good conversation most people can tell when it’s a not good time to come and interrupt, so they wait for a natural break. When the food is in front of us it’s better to wait a few minutes, but when I am rolling in or rolling out I’ve got plenty of time to say hello to anyone.”

Batali loves to play golf in Michigan, but when he does cook, he incorporates Michigan cherries in his dishes. “They’re a natural ‘superfood’ and they’re delicious. When you get a local, fresh-picked cherry it says so much to you and tastes so great; you should only have them when they’re in season. Really good cooking is about where the ingredient is from, when it ‘sings’ its’ best, and when it’s not affected too much by the cook themselves.”

Michael Patrick Shiels may be contacted at InviteYourself@aol.com or via TravelTattler.com His talk show can be heard and seen weekday mornings in Lansing on 92.1 FM and Fox 47 TV.